Lawyers gave their closing arguments Tuesday in a trial that could influence how Oregon state forests are managed going forward.

Fourteen counties and dozens of tax districts that receive revenue from harvesting trees on state forests are suing the state for $1.4 billion in past and future damages. The jury trial has been underway at the Linn County Circuit Court in Albany for more than two weeks. 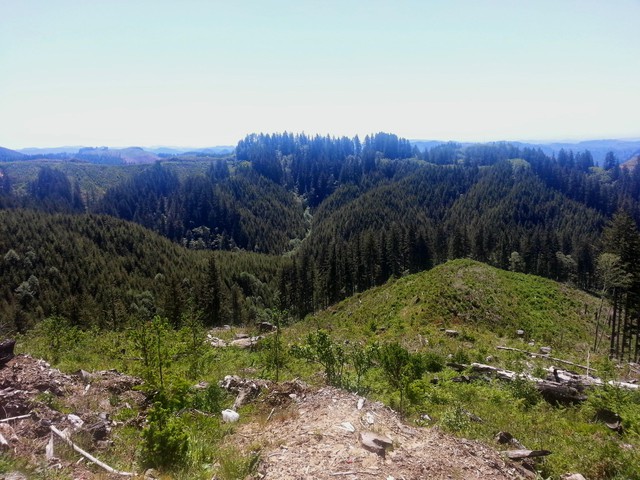 The counties, led by Linn County, say the state promised 80 years ago to manage the land for the “greatest permanent value,” which means logging public forests like privately owned, industrial timberlands. The counties argue that because the state has not taken that approach, they are in breach of contract.

The state counters that the “greatest permanent value” of state forests does not only mean the value of the timber as a raw material to be cut down, hauled away and milled into plywood, lumber and other wood products. It also means the value from other forest benefits, like hunting and fishing, clean water, and wildlife habitat.

In closing arguments, the lawyer representing the counties, John DiLorenzo, told the jury that this is a clear-cut case of breach-of-contract.

“One side of the contract cannot get away with saying, ‘you know I promised to do x, y or z, but hey, times have changed. And the world has changed. And I don’t want to do that anymore,’” he said.

Back then, Western Oregon counties took ownership of tens of thousands of acres of timberland that private landowners had cut and then failed to pay taxes on.  Tillamook County had a significant amount of tax foreclosed private acres that had burned in a series of major wildfires in the region.

During the Depression years, the counties didn’t have the resources to restore the land to productivity, so they passed the forestland to the state to restore and manage. Under the laws governing the transfer, the counties were to receive about two-thirds of the receipts from any future logging of the land.

In its closing arguments, the State of Oregon argued no breach of contract occurred. Its attorneys emphasized documents showing the counties suing the state did not oppose, and had expressed some support for, the state’s definition and implementations of “greatest permanent value” when the state adopted them — a definition at the crux of whether the contract was violated.

Christina Beatty-Walters, a lawyer with the Oregon Attorney General’s Office, told jurors that revenues to counties reached record levels after 1998, the very period in which plaintiffs argued the breach of contract occurred.

And, she said, plaintiffs could not point to a timber sale they claim should have happened but the state didn’t complete.

“They’re asking the state for a billion dollars,” she said. And they haven’t identified one, not one. That is really something.”