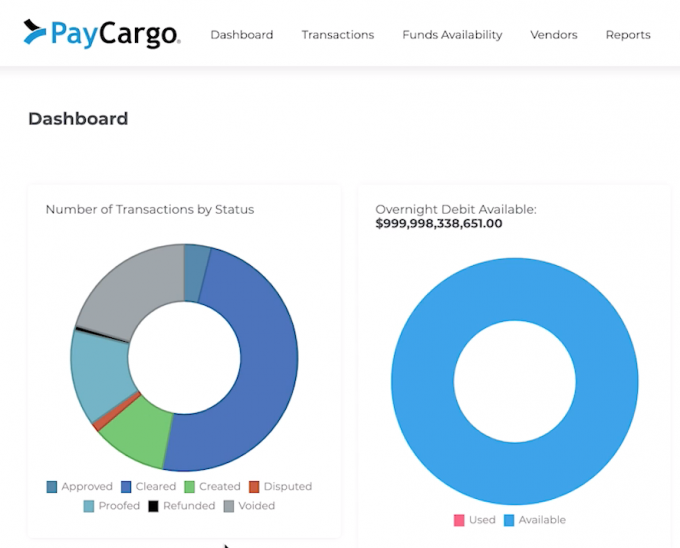 PayCargo has launched itself with much fanfare into the air cargo industry.

The firm began its business – instant payments between forwarders/agents and carriers – a decade ago in the ocean freight trade, building up some 2,500 vendors on its books and nearly 13,000 payers.

And its popularity is continuing, according to its chief executive officer for the Americas, Lionel van der Walt.

“This is a big marketplace that’s so behind in terms of tech,” he said. “There is huge opportunity.

“PayCargo is doubling its revenues and ebitda every year; we are a hyper-growth company.”

“The industry used to use cheques,” explained Mr van der Walt, “which cost between $17 and $30 per transaction, so this is a beautiful thing. It’s a very low rate so it is a huge saving for them – and the payers have been pushing for it.”

PayCargo guarantees the payment and offers instant confirmation, allowing the cargo to be released.

Mr van der Walt added: “There are economies of scale in having a middle man – there are so many vendors and payers. This is one system, one process. All participants need is API. We can connect to most major IT systems, Champ, Accelya, Unisys and so on.”

And he pointed out that the younger generations coming into logistics would expect to see payments done using technology they have grown up with.

PayCargo, which has an all-male board and management team, said it was aware of the lack of diversity, which is common in fintech, and is working towards change.

But one of the most noticeable things about the PayCargo,  is the liberal use of IATA’s logo on its promotional material. IATA (which, if we’re counting, has just one woman board member out of 32), of course, has its own payment system, CASS, and via CNS in the US. But PayCargo insists it focuses mainly on import transactions, while CASS/CNS focuses on exports, and the pair don’t compete.

But their relationship is very cosy. Mr van der Walt spent 10 years at IATA and then became president of IATA’s US offshoot, CNS, for two years, during which time PayCargo became endorsed by CNS – “There was a big push.”

Mr van der Walt left CNS in December 2017 to head a builders’ association, but was approached by PayCargo to become a board member in March 2018, and became president and chief executive for the Americas in July this year.

In March this year, PayCargo announced an agreement with IATA “to jointly offer the air cargo industry advanced and efficient payment and settlement: the IATA-PayCargo System.

“The latest announcement allows customers worldwide to benefit from the ability to make fast, online payments as well as have immediate access to settlement data.”

One source close to IATA told The Loadstar it would come as no surprise if, one day, PayCargo’s ambitions included taking over IATA’s role in the payment arena. PayCargo dismissed this as speculation.

But the source questioned the process by which PayCargo had been so wholeheartedly endorsed by IATA, which also has something of a central, and arguably monopolistic, position. Competitors might find themselves considering the same question.

Instant and cheap transactions in the freight industry have been welcomed, and PayCargo is not alone in offering such services, but Mr van der Walt explained that other companies offered credit.

“PayCargo doesn’t use any credit to enable its own operations,” he insisted. “We don’t want to touch the money. It’s all done through the bank.”

However, it does offer credit to customers.

“We work with PayCargo’s client base to help them improve their working capital and cash management. We offer deferred payment terms, typically 30 days, to clients within the PayCargo System, so there is no extra work flow or process involved. When a client uses our signature product, PayCargo Credit, the vendor receives the payment immediately, funded by us, so the transaction proceeds as rapidly as possible,” notes the website.

It would appear that the market is welcoming more efficient payment transactions. And PayCargo is certainly lobbying hard to provide the solution.

Its next stop is China, where it hopes to announce soon a partnership which will allow it to offer its services in the country.

Updated November 13 to include PayCargo’s response to comment on its all-male board and executive; more detail on credit; and response to “speculation” on IATA.