Police in Uruguay seize 5.9 tons of cocaine worth $1.3 BILLION that was packed in cargo containers

Police in Uruguay seize 5.9 tons of cocaine worth $1.3 BILLION – most of it packed into four cargo containers in the port of Montevideo bound for Togo

By Associated Press and Adry Torres For Dailymail.com

At least four people have been arrested over the seizure of $1.3 billion worth of cocaine in Uruguay last week, the largest drug bust in the history of the South American country.

One of the containers had more than 3,000 plastic-wrapped bundles of cocaine.

According to Uruguayan media reports, the record-sized shipment of the Class A drug were expected to be loaded on an Italian ship and bound for Lome, the capital city of the west African nation of Togo. 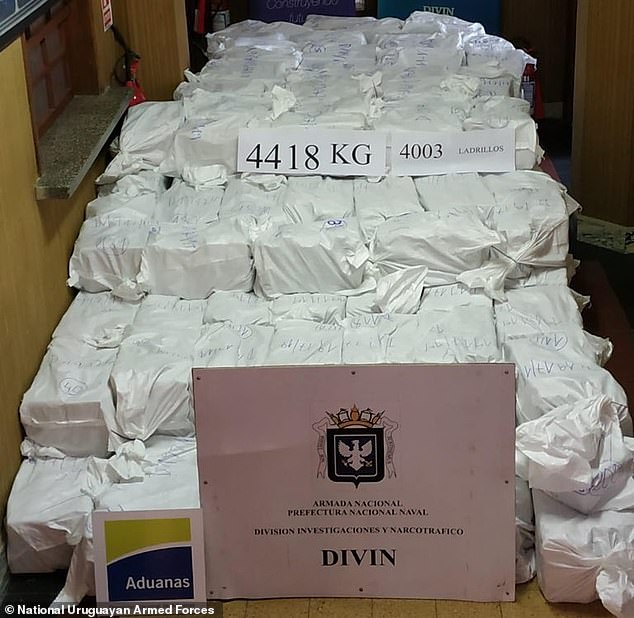 A record 5.9 tons of cocaine was confiscated by authorities in Montevideo, Uruguay, last week, including 4.4 tons found in four cargo containers 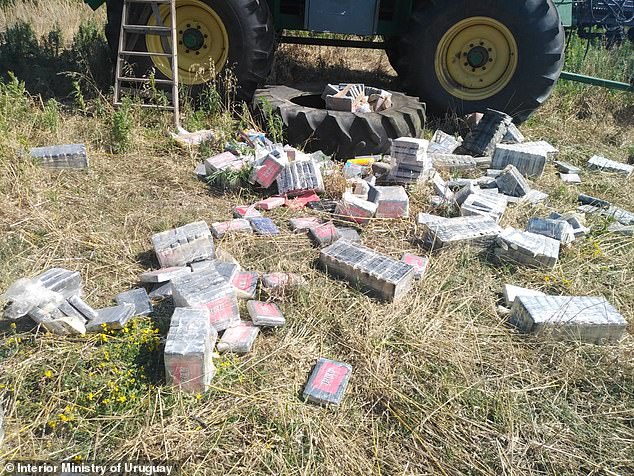 Investigators found 1.5 kilos of cocaine at a rural property in Dolores, Uruguay, on Saturday. The drugs were allegedly part of a nearly six-ton shipment that was supposed to leave for the west African nation of Togo. Pictured above are some of the plastic-wrapped cocaine packages from Saturday’s drug bust

New outlets also reported that among the men arrested was Luis Gastón Murialdo Garrone, a businessman from the rural zone of Dolores.

All four suspects are being held without bail.

The investigation led authorities to more than 1.5 tons of cocaine at a rural property linked Murialdo Garrone were soy beans were harvested. The raid also led to the arrest of Murialdo Garrone’s 19-year-old son.

Murialdo Garrone is also the father of Gonzalo Garrone, who ran for a congressional seat in the October general elections.

Authorities said that Murialdo Garrone’s company, Camelia Sociedad Agraria, was the only Uruguayan business that shipped soy beans to Togo in 2019. It last did so on three occasions – December 11, 12 and 20. 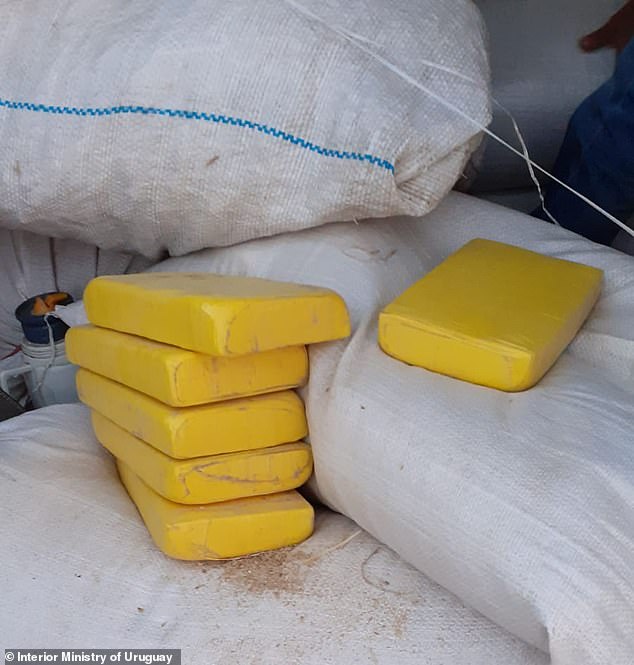 In a separate drug bust Saturday, law enforcement agents in Montevideo arrested a 47-year-old man driving a van with more than 400 kilos of cocaine

In a separate drug bust Saturday, cops arrested a 47-year-old man driving a van with more than 400 kilos of cocaine in 12 large bags.

Uruguay, a country of just 3.4 million inhabitants, has recently arrived on the world stage as a transit point for the international drug trade.

Agents confiscated three tons of cocaine hidden inside a container at a port in Montevideo in November. The drugs were worth $740 million.

In August, 4.6 tons of cocaine were confiscated in Hamburg, Germany, inside a container that had shipped from Montevideo. Enrique Canon, customs director in Uruguay resigned shortly after.

‘Today customs is prepared. It is fighting this crime that is harming the country a lot,’ Uruguay customs director Jaime Borgiani said. ‘I know we had a lot of resistance, I know we had to be very careful not to increase importers’ costs.’