On December 20, 2019, the new Directive on Government Contracts, Including Real Property Leases, in the Nunavut Settlement Area (Directive) will come in to effect.

The Directive implements requirements across the federal government to ensure that support is provided to Inuit firms to enable them to compete for government contracts, including real property leases, and to ensure consistent implementation of the obligations of the largest land claims settlement in Canada; the 1993 Agreement between the Inuit of the Nunavut Settlement Area and Her Majesty the Queen in right of Canada (Nunavut Agreement) (PDF).

While Article 24 of the Nunavut Agreement contains broad principles for procurement, the Directive clarifies and makes mandatory specific objectives, roles, and responsibilities for government officials – from pre-procurement planning and design through to contract award and contract administration.

This Bulletin provides a general overview of how the Directive will impact federal government procurement in Nunavut. At the end, we identify some outstanding questions that remain regarding the Directive requirements and how they will be implemented.

Who and what does the Directive apply to?

The Directive applies to:

From a policy perspective, the Directive is paramount if there is a conflict between the Directive and any other Treasury Board or departmental policy instruments (which would include the Procurement Strategy for Aboriginal Businesses). The Directive is subordinate to all conflicting legal obligations, such as legal obligations within the Nunavut Agreement, other comprehensive land claims agreements, or other laws.

The Directive does not apply to any government contracts, including real property leases, or solicitations or invitations entered in to before December 20, 2019.

How will the Directive impact procurement in Nunavut?

The Directive has clarified and made mandatory certain obligations under Articles 8, 9, 24, and 33 of the Nunavut Agreement, including:

Government solicitations and contracts designed with a preference for Inuit firms

Bids for government contracts in the Nunavut Settlement Area will be limited to qualified Inuit firms as follows: 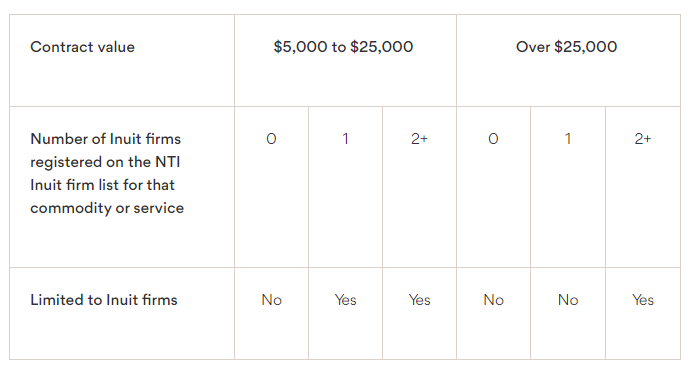 In those cases where a competition would be contrary to public interest, national security, or where there is a pressing emergency endangering the quality of life or safety of Canadians, the government retains the right to sole source its requirements; however, the government will still make best efforts to sole source to a qualified Inuit firm.

For goods, services, and construction services procurements with a value over $100,000 and real property leases with an estimated value over $1,000,000, contracting authorities and designated real property officials are now responsible for including the following four criteria in a solicitation.

For government solicitations that do not meet the financial thresholds, the contracting authorities and designated real property officials are to make best efforts to include all four bid criteria in all competitive solicitations where practical and in keeping with sound procurement management principles.

Weighting of the mandatory criteria

The default weighting for the four criteria is as follows: 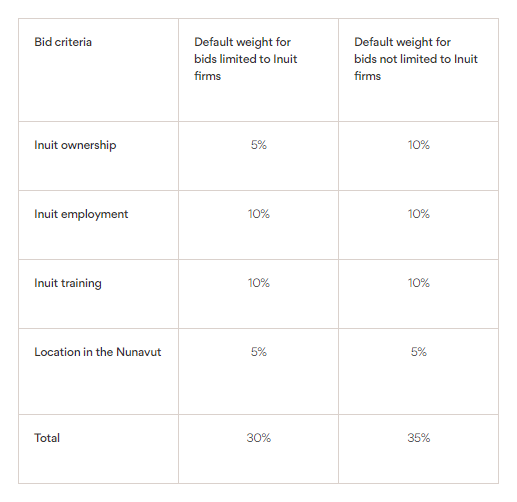 Appendix B of the Directive provides a sliding scale that is applied when all four of the mandatory criteria cannot be included or the default weighting cannot be applied for a particular criterion. If the sliding scale is used, the total weighting of the mandatory criteria of 30 or 35% must be allocated amongst the remaining criteria. For example, if Inuit ownership is not possible as a bid criterion, the default weighting of 5% must be reallocated to the remaining bid criteria to ensure the total default weight remains at 30% or 35%, as applicable. Criteria weighting can also be set at higher percentages.

Information required in a bid

Bidders will be required to provide the following information in their bid:

The government’s “estimated contract value” must take in to account the cost of doing business in the Nunavut Settlement Area as well as the cost of including the Inuit and Nunavut benefits criteria. As such, bidders should clearly identify these costs in their bids.

As part of the Settlement Agreement Nunavut Inuit Labour Force Analysis (NILFA) was completed, to assess the capacity and interest of the Inuit labour force to participate in government employment opportunities. Government departments and agencies will use the NILFA to develop Inuit employment plans and pre-employment training plans. This report will be of interest to suppliers seeking to understand the Nunavut Inuit labour force when preparing bids.

Government contracts in parks and conservation areas and for archaeological work

NTI has the right of first refusal to operate all business opportunities contracted out by Canada with respect to parks in the Nunavut Settlement Area.

The requirements generally applicable to federal government procurement continue to apply, including ensuring that bids fulfill all mandatory bid criteria and comply with all applicable policies, and that the supplier has sufficient capacity to meet the contract requirements, is qualified and has legal capacity to enter in to the contract or lease. Contractors can be required to obtain independent validation of achievement of the Inuit and Nunavut benefits during the term of the contract.

The Contracting Policy and Supply Manual includes select sections of Article 24 of the Nunavut Agreement. To date, no amendments have been made to reflect the Directive, although Public Works and Government Services (PSPC) has indicated it will be developing guides and tools, and will provide training to support successful implementation.

As yet, there are no Directive-specific terms or conditions in the Standard Acquisition Clauses and Conditions (SACC) Manual addressing the Directive requirements that would flow down to contractors. Contracting authorities may need to create customized provisions for each procurement to ensure that the Directive’s objectives and the operational requirements of the end user client are achieved.

Over time it is anticipated that the Directive will evolve, as the requirements are implemented into practice and the duty to consult is fulfilled. While the Directive appears to be robust, a number of issues that do not appear to have been addressed are worth noting as they have the capacity to impact the solicitation process:

The financial thresholds for limiting services contracts to Inuit firms is lower than the recently amended sole source thresholds in the Government Contract Regulations (GCRs)[4]. Under the GCRs, contracting authorities may now award contracts without soliciting bids for any contract, excluding a goods contract, where the estimated expenditure does not exceed $40,000 (an increase from the original $25,000 limit).

The Directive does not provide guidance to address the situation when a solicitation is valued at less than $5000, but no qualified Inuit firms are identified on the NTI firm list.

Frequent reference is made to “qualified” Inuit firms within the Directive, but it is unclear how or when this determination is made. Within the context of a solicitation, the requirements for “qualification” must be expressly identified to enable bidders to properly respond to this requirement and to prevent this requirement from becoming undisclosed evaluation criteria during the bid evaluation process.

The Directive provides that “preferential treatment” be afforded to Inuit (by contractors) and Inuit firms (by the government) for contracts for park facilities or archaeological work. This requirement reflects the language of the Nunavut Agreement, but, in contrast to the other specific and measureable requirements in the Directive, no further guidance is provided to government officials or contractors. This type of requirement will need to be clarified to enable bidders to properly responded to a solicitation and the government bid evaluation team to properly evaluate bids if it is a criterion of any solicitation.

The Directive does not explain what should occur when qualified Inuit firms are registered on the NTI firm list, but none choose to bid on the government solicitation.

The Nunavut Agreement contains some of the most prescriptive requirements for federal government procurement in any comprehensive land claims agreement in Canada’s North.

Over a quarter-century after execution of the Nunavut Agreement, the Directive seeks to implement these obligations into government policy with a robust set of requirements, intended to support and promote Inuit participation in federal contracting, including an on-going review process, concrete reporting obligations, specific responsibilities for government officials and contractors, and mandatory bid criteria.

Regardless of your focus, knowing how the public procurement process works, including how to review and respond to government solicitations subject to the Directive and how to best advocate for your interests, is a crucial part of any bidding strategy. Working with a legal team that has knowledge and experience in all of these areas and can assist with strategic planning and approach from start to finish is critical to success.

The full Nunavut Directive may be found here.