Resolve ongoing impasse on use of SGR to move cargo : The Standard 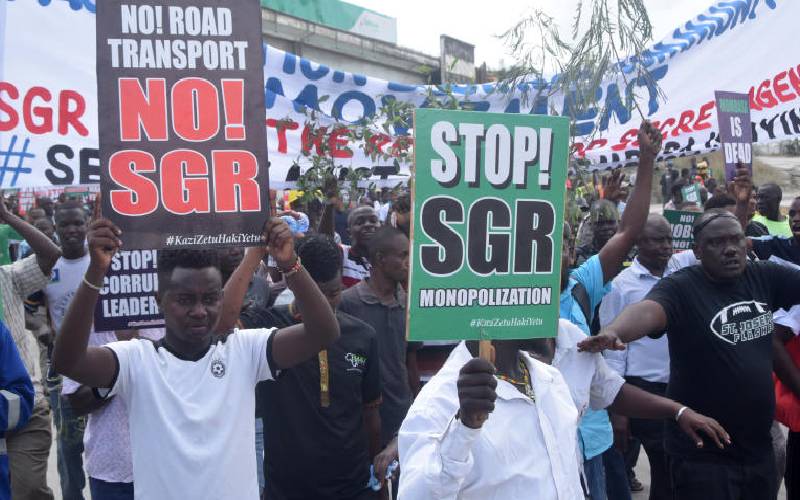 Reports that performance of the Mombasa port improved considerably last year were clouded by a standoff between truckers, clearing and forwarding agents and the government.
The controversy revolves around a directive that all cargo containers destined for upcountry be ferried on the Standard Gauge Railway.
Truckers and clearing agents have been protesting that the government should let cargo owners decide what mode of transport to use to move their containers. On its part, the government maintains that the directive is meant to curb diversion of regional-bound cargo.

SEE ALSO :What is government not telling us about the SGR?

Some observers point out that the government’s directive is meant to ensure the SGR recoups billions spent on it. Still, this controversy does not augur well for the region’s economy.
It also risks watering down the goodwill enjoyed by the SGR at its launch.
Last year, it was reported that the government had bowed to pressure and agreed on sharing of cargo. But while the Kenya Ports Authority insists that this agreement has been implemented, truckers say it has not been honoured.

For More of This and Other Stories, Grab Your Copy of the Standard Newspaper.

Granted, the government has a Chinese loan to pay off, but the people and families losing their livelihoods are Kenyans. They can reasonably argue that the government has no business trading with itself and should let market dynamics determine who, between truckers and SGR, is offering lower rates to move cargo.
Either way, this controversy must not be allowed to go on. Both sides should come up with an arrangement where all interests are taken care of.

Do not miss out on the latest news. Join the Standard Digital Telegram channel HERE.