A Roman shipwreck from the time of Jesus has been discovered. The Mediterranean Sea has given up many treasures, and there are still more to be found. Ancient shipwrecks litter the bottom of the sea and no one knows the extent of riches that may be buried in the sand.

While collecting data on an equipment assessment survey along Kefalonia Island in the Ionian Sea, a large bay of the Mediterranean south of the Adriatic Sea, Dr. George Ferentinos from the University of Patras in Patras, Greece and his team located a Roman shipwreck and its massive cargo of about six thousand amphorae covering the seabed, along with large two handled terracotta jugs with narrow necks used to transport mostly wine, fish sauce, and olive oil.

The scientists used underwater side scan sonar to detect any areas of interest and discovered the ship which dates back to between the 1st century BC and the 1st century AD right around the birth of Christ. According to Dr. Ferentinos’ research paper at ResearchGate, the ship would have been almost one hundred and twelve feet long and almost forty-three feet wide. 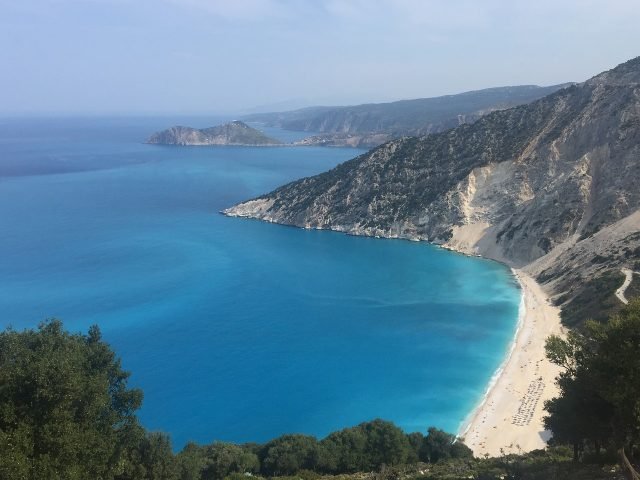 Kefalonia, Greece, near where the shipwreck and amphorae were found.

The ship, which has been named after a nearby village, Fiscardo, is one of the largest found so far in the Mediterranean Sea, and is larger than most merchant ships of the time. From this wreck, Dr. Ferentinos hopes to learn more about trade routes, construction of ships, and how amphorae were stored in ship hulls.

Chemical and DNA analysis may yield more information about the actual contents of the amphorae. The team noted that, because of the outline of where the ship came to rest at the bottom of the sea, they believe it sank slowly in an upright position just slightly listing after it touched the sea floor. 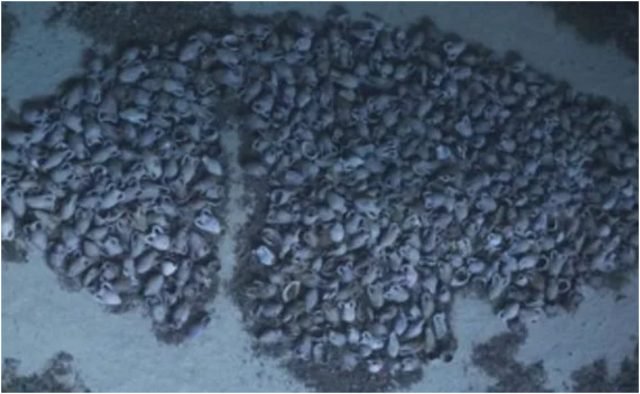 Amphorae from the shipwreck covering the sea floor. (Ionian Aquarium)

Dr. Ferentinos also notes that, in present day Fiscardo, a Roman village has been excavated dating from about 146 BC to 330 AD with homes, the ever present bath houses, an amphitheater, and a cemetery, indicating the importance of the area as a trade route. There have been three other ancient shipwrecks found in that eastern area of the Mediterranean Sea. 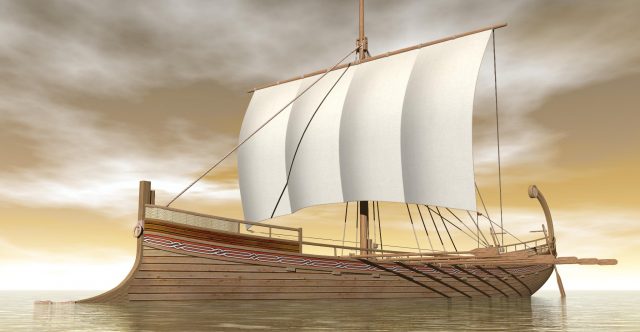 The Daskalio and the Antisami, found in 2000 and 2011 in the Ithaka-Kefallinia Strait, have been damaged by looters; but a wreck near the seaport of Vlorë, Albania, found in 2012, is still in good condition. Another wreck, found off the coast of Antikythera in 2012 was nearly as large as the Fiscardo and carried the world’s oldest computing mechanism.

The world’s oldest shipwreck dating from 400BC of ancient Greek origin, most likely a trading vessel. Photograph: Black Sea map

Ancient Origins tells us there have been a total of fifty-eight shipwrecks discovered so far in the archipelago of the Aegean Sea from Ancient Greece to modern times. A number of ships were found by international marine archaeologists of the Ephorate of Underwater Antiquities. A study began in 2015, and twenty-two wrecks were discovered in that year alone, with another thirty-six found since then.

Amphorae have been retrieved from the wrecks and are estimated to have been on at least ninety percent of cargo vessels. While such goods were the most common found among the shipwrecks, some ships were carrying marble, marble columns, and sarcophagi. In the Adriatic Sea, a five hundred mile long arm of the northern part of the Mediterranean Sea between Italy and the coastline of the Balkan Peninsula, several ships have been found carrying such heavy cargo according to the shipwreck database at The Oxford Roman Economy Project.

Exact positions of the wrecks are not listed for fear of looting by the public. More ships have also been found in the West Mediterranean Sea including the Torre Sgarrata which was sailing from Asia Minor toward Rome about the second century AD with eighteen sarcophagi, twenty three large blocks of marble, and marble veneer with a possible total weight of two hundred and fifty tons. Other smaller cargo included amphorae, other pottery, two glass vessels, and a coin with the likeness of Commodus who was the Emperor of Rome from 180 to 192 AD.

All of these shipwrecks, especially those in shallower water such as the Fiscardo, are in danger of being looted by treasure hunters or destroyed from dragging anchors and fishing nets. Team members from the Fournoi Project, discussed in Ancient Origins, have suggested than an underwater museum be established to safely allow students and interested divers to experience the wrecks.