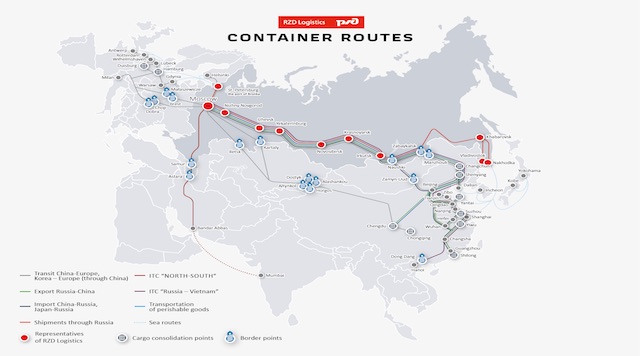 CIS and Baltic multimodal logistics operator RZD Logistics JSC successfully transported the first transit container from Europe to Japan through the territory of Russia within the Trans-Siberian LandBridge – the service for expedited delivery of transit cargo.

The 40-foot test container, consisting of various groupage cargoes, was departed from Hamburg (Germany) to the port of Yokohama (Japan). The shipping customer was one of Japan’s largest forwarding companies Nippon Express Co., Ltd. The route passed through the Malashevich-Brest border crossing, and then through the territory of Belarus and Russia to Vladivostok, from there the container was delivered by sea to the destination point. The cargo was in transit for 22 days, 10 days of which were in the space of the 1520 gauge. The container was equipped with temperature, humidity and vibration sensors so that the customer could verify the safety and quality of transport along the Trans-Siberian Railway. In addition, throughout the entire time the service was provided, the client was provided with detailed information on the location of the cargo on a daily basis.

“Since the end of May this year, we have been organizing transit shipments from Japan and Korea to Europe via the Russian Far East via the Trans-Siberian Railway as part of the Trans-Siberian LandBridge service. And the launch of shipments in the opposite direction from West to East is a logical continuation of the development of our promising logistics product. The first test large-tonnage container destined for the port of Yokohama demonstrated to the Japanese client that this multimodal route is not only more than twice as fast as shipping by sea, but also guarantees cargo safety throughout the entire transportation period. In Trans-Siberian LandBridge, we see very great potential, as many shippers are extremely interested in reducing transit time between the European countries and Japan. For example, only Nippon Express annually delivers about 10 thousand TEU via deep sea to Europe and back”, Vyacheslav Valentik, General Director of RZD Logistics JSC.

Trans-Siberian LandBridge is a new multimodal transit service for the expedited delivery of cargoes in containers from Japan to Europe and back through the ports of the Russia’s Far East and the Trans-Siberian Railway. The service can significantly reduce the shipping time in comparison with traditional sea routes or transit through China. Trans-Siberian LandBridge is the main tool for the implementation of the agreement between Russian Railways, the Ministry of Transport of the Russian Federation, the Ministry of Land, Infrastructure, Transport and Tourism of Japan and the Association of Trans-Siberian intermodal operators of Japan on the organization of container transportation using rail transport in the Japan-Russia-Europe connection.