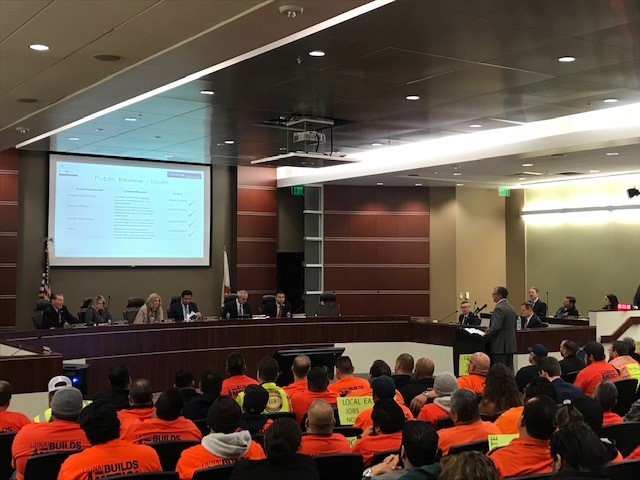 Located at SBD International Airport, the project is part of the Airport’s master plan to revitalize the former Norton Air Force Base (NAFB). With the Commission’s approval, construction begins on the Eastgate Air Cargo project, which will bring thousands of jobs to the San Bernardino region.

The Commission’s decision concludes a multi-year environmental and community review process, which included input from the FAA, the South Coast Air Quality Management District, and many other resource agencies and community participants. SBIAA Commissioners are elected officials from the County of San Bernardino, and Cities of: San Bernardino, Colton, Loma Linda and Highland.  Since base closure, they have worked to help ensure that the needs of the surrounding communities are addressed.

AllianceCalifornia’s mission is to bring sustainable economic revitalization to the communities affected by NAFB’s closure. It is a public-private partnership between the Inland Valley Development Agency (IVDA), SBD International Airport, and Hillwood that has aided in bringing the region back from the devastation caused by base closure, and more recently, the Great Recession of 2008.

The Inland Empire Economic Partnership (IEEP), an organization focused on economic development in the region, supports AllianceCalifornia efforts. IEEP President and CEO Paul Granillo noted, “The logistics industry has fueled the Inland Empire’s spectacular recovery by generating an estimated 84,000 new jobs – that’s nearly one out of every four new jobs – over the past 10 years. Eastgate will continue to grow the region’s economy in air cargo, so we can work closer to home and create good jobs for workers of all skill and education levels.”

The average wage of the jobs created at Eastgate is projected at $26 per hour and will include new aviation-specific occupations. AllianceCalifornia is committed to finding a tenant for Eastgate that offers robust benefits including medical, dental, vision, paid leave, and other financial assistance.

The SBIAA Commission’s approval follows the Federal Aviation Administration’s (FAA) Record of Decision of a Finding of No Significant Impact on the environment.

“Since 2002, AllianceCalifornia has created over 12,645 permanent jobs, surpassing the 10,000 jobs that were lost when Norton Air Force Base had to close its doors,” said SBD International Airport’s Executive Director Michael Burrows. “Almost 20 years in the making, this Eastgate project is an incredible chapter in our public-private partnership with Hillwood. On aeronautically-restricted property, this was one of the more challenging yet truly vital elements of our multi-year revitalization efforts. It is a major step towards innovating a green, sustainable air cargo complex that flies and drives our economy without the use of public subsidies.”