HALIFAX, Nova Scotia, Dec. 18, 2019 (GLOBE NEWSWIRE) — ScoZinc Mining Ltd. (TSX-V: SZM) (“ScoZinc” or the “Company”) is pleased to announce a new Mineral Resource Estimate (“MRE”) for its 100% owned Scotia Mine located near Halifax in the Province of Nova Scotia. The MRE was prepared by SRK Consulting (U.S.), Inc. (“SRK”).

The President and CEO, Mr. Mark Haywood, stated “ScoZinc is exceptionally pleased with the results of the new mineral resource estimate by SRK.  This independent estimation almost doubles our Scotia Mine’s mineral resources which represents a strong validation of our strategy that ScoZinc and its Scotia Mine has been severely under-valued by past owners and the marketplace.

With SRK’s new large mineral resource determination, we are now proceeding to complete a pre-feasibility study (“PFS”) lead by Ausenco Engineering.  The PFS, due in March next year, is expected to support our strong view that the Scotia Mine has the potential to become a long-term low-cost open-pit base metals producer in Nova Scotia.” 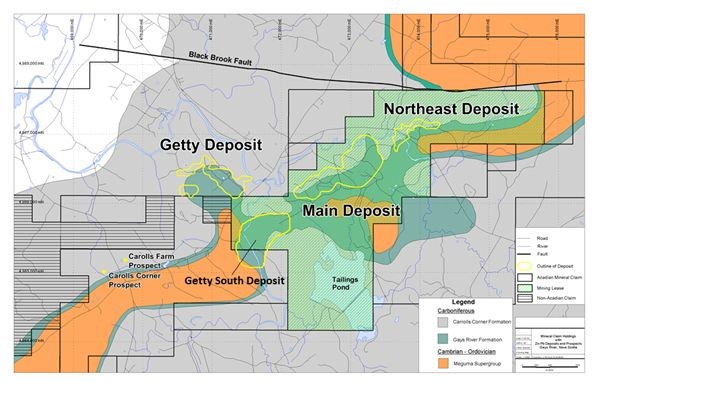 ScoZinc is an established Canadian exploration and development company that has full ownership of the Scotia Mine (Zn/Pb) and related facilities near Halifax, Nova Scotia. ScoZinc also holds several prospective exploration licenses nearby its Scotia Mine and in surrounding regions of Nova Scotia. The Scotia Mine is currently on care and maintenance, however the Company intends to re-start operations as soon as possible.

The Company’s common shares are traded on the TSX Venture Exchange under the symbol “SZM”.


The Company’s corporate filings and technical reports can be viewed on the Company’s SEDAR profile at www.sedar.com. Further information on ScoZinc is also available on Facebook at www.facebook.com/ScoZinc, Twitter at  www.twitter.com/ScoZincMining, and LinkedIn at  www.linkedin.com/company/scozinc-mining-ltd.

This News Release includes certain forward-looking statements which are not comprised of historical facts. Forward-looking statements include estimates and statements that describe the Company’s future plans, objectives or goals, including words to the effect that the Company or management expects a stated condition or result to occur. Forward-looking statements may be identified by such terms as “believes”, “anticipates”, “expects”, “estimates”, “may”, “could”, “would”, “will”, or “plan”. Since forward-looking statements are based on assumptions and address future events and conditions, by their very nature they involve inherent risks and uncertainties. Although these statements are based on information currently available to the Company, the Company provides no assurance that actual results will meet management’s expectations. Risks, uncertainties and other factors involved with forward-looking information could cause actual events, results, performance, prospects and opportunities to differ materially from those expressed or implied by such forward-looking information. Forward looking information in this news release includes, but is not limited to, the Company’s objectives, goals or future plans, statements, potential mineralization, exploration and development results, the estimation of mineral resources, exploration and mine development plans, timing of the commencement of operations and estimates of market conditions.  In particular, the Company has not made a production decision with respect to ScoZinc’s Scotia Mine. The Company has not completed a feasibility study or established the economic viability of the Project or proposed operations on ScoZinc’s Scotia Mine, and no mineral reserves have been established for ScoZinc’s Scotia Mine that would support a production decision. Mineral exploration projects which are put into production without first establishing mineral reserves and completing a feasibility study have historically had a higher risk of economic or technical failure. There can be no assurance that forward-looking statements will prove to be accurate and actual results and future events could differ materially from those anticipated in such statements. Important factors that could cause actual results to differ materially from ScoZinc’s expectations include, among others, availability and costs of financing needed in the future, changes in equity markets, risks related to international operations, the actual results of current exploration activities, delays in the development of projects, conclusions of economic evaluations and changes in project parameters as plans continue to be refined as well as future prices of metals, as well as those factors discussed in the section entitled “Risk Factors” in ScoZinc’s Management’s Discussion and Analysis. Although ScoZinc has attempted to identify important factors that could cause actual results to differ materially, there may be other factors that cause results not to be as anticipated, estimated or intended. There can be no assurance that such statements will prove to be accurate as actual results and future events could differ materially from those anticipated in such statements. Accordingly, readers should not place undue reliance on forward-looking statements.