Sheffield city council has reassured residents that material destined for Veolia’s materials recycling facility (MRF) in the city is being redirected elsewhere, after the site was forced to temporarily close due to ‘significant’ flooding. 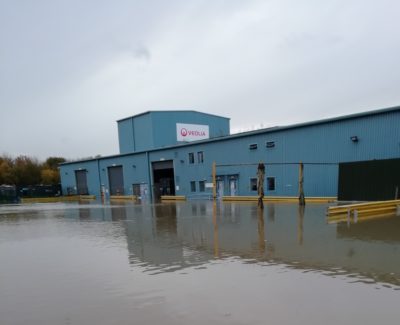 The council put out a statement yesterday (November 20) explaining that Veolia had been forced to close the facility earlier this month for repair after heavy rainfall had caused damage.

The facility at Beighton handles around 20,000 tonnes-a-year of paper and card collected from blue bins across Sheffield. The plant separates the different types of paper and card which are then bailed and transported for recycling.

After the flooding, which caused disruption to a number of recycling services across the country earlier this month (see letsrecycle.com story), the council said that “every effort” was made to recover all the paper and card bales being stored at the site, but some were contaminated by floodwater and so could be recycled.

It added that instead, this material is being sent to Sheffield’s Energy Recovery Facility instead and all bales unaffected by the flooding will be recycled.

“The damaged caused by the flooding, has meant that the materials recycling facility will be closed for a short period for repair”, the council said.

Veolia is now using alternative sites to continue to separate the paper and card collected from blue bins across Sheffield for recycling.

“The damaged caused by the flooding, has meant that the materials recycling facility will be closed for a short period for repair”

Gillian Charters, head of waste management at Sheffield city council, said: “We are strongly committed to ensuring that all material collected for recycling in Sheffield is recycled, but for reasons beyond our control, floodwater damage has meant that we have had no choice but to send some paper and card to our energy recovery facility, rather than for recycling.

“I would like to assure residents that all paper and card collected from blue bins since the flooding took place, has been taken to an alternative recycling site and will be sent for recycling, and that as with all our general waste collections, none of the affected materials will be sent to landfill.”

The council added that the recycling facilities used for the glass, cans and plastic bottles collected in the brown bins have not been affected by the flooding, and all materials collected will be recycled.