by Lisa Ratcliff/OCC
In anticipation of the 75th edition of the Rolex Sydney Hobart Yacht Race, on a quiet and hazy Sydney Harbour morning, some special entrants gathered in front of the famous Sydney Opera House sails.

Back-dropped by the one of the Australian city’s most recognized cultural and architectural icon, six timeless Sparkman & Stephens designs of varying size and vintage assembled to reflect 60 years of design achievement.

Ranging from the 34-foot Komatsu Azzurro to the largest, Kialoa II at 73 feet, there is plenty of Sydney Hobart Race pedigree among the elegant S&S gang to tackle the 628 nautical mile stretch on December 26 along the New South Wales and Victorian coastline to the finish in Hobart’s Derwent River.

Simon Kurts’ S&S 47 Love and War is a three-time Sydney Hobart overall winner, one of only two in the race’s 74-year annals to achieve such an honor. With a phenomenal 172 Hobarts among nine crew, and navigator royalty Lindsay May plotting course, we can expect big things of the cold-moulded Oregon and Maple build, launched in 1973 for the late Peter Kurts.

Paddy, Melinda, and Keith Broughton’s well-traveled Kialoa II, originally a sloop then a yawl, was the 1971 Sydney Hobart Yacht Race line honors winner. Commissioned by Jim Kilroy, who created the Kialoa legend, Kialoa II was regarded as cutting-edge for the time, given the lightweight aluminum rather than tried and tested timber hull construction.

The 75th anniversary Rolex Sydney Hobart will be the Kialoa II’s third preeminent bluewater classic on the trot, and the Sydney boat is extremely well-prepared given the owners took four months out of the year to be part of the 50th anniversary Transpac Race, a 2,225 nautical mile crossing from Los Angles to Honolulu.

Ashok Mani’s S&S 48 Windrose and Shane Kearns’ 1981-launched sloop Komatsu Azzurro were transformed from rotting forgotten hulls to their now graceful, near-original condition, taking time and an injection of cash that likely will never balance against the purchase price. Each owner spotted the beautiful design-lines of the dilapidated hulls in different parts of the world and fell in love.

Komatsu Azzurro has raced extensively in Southern Ocean waters, the Sydney-based S&S 34 earning major IRC trophies along the way, while the yawl-rigged Windrose, which lives in Singapore, is new to the ocean-going scene and a Hobart first-timer. Windrose launched in 1959 for Jacob Isbrandtsen to join the USA Admiral’s Cup team that year; two years later the Cup left British shores for the first time ever, thanks to the team of Windrose, Cyan, and Figaro.

Now gearing up for a third Sydney Hobart, owner of the grand Swan 65 ketch Eve, Steve Capell, says, “My favorite thing about owning an S&S is the amazing smooth ocean passage-making performance. She just parts the waves like a freight train; no slapping or pounding. There can be a gale above deck, and you wouldn’t know it down below. Four years on from buying Eve I look at her in the water or dockside and she still stirs my heart.”

The dark blue-hulled S&S 39 from Middle Harbor, Galaxy III, is readying for the boat’s fifth Sydney Hobart and the first for latest owner Chris Canty, who was inspired to buy into the class by Jon Sanders and Jessica Watson’s successful circumnavigations.

He agrees the S&S yachts have a reputation for solid, sea-kindly designs. “The two things I most like about owning an S&S are that the boat took me around the world in 2018, and the compliments on her lines from people passing by on the dock.”

With their (mostly) cream sails against the Opera House’s towering solid sails and the Sydney Harbor Bridge, the six crews gathered to show off the fine profiles and design achievements of the world-famous pairing of Olin Stephens and Drake Sparkman, who founded the brokerage and naval architecture house Sparkman & Stephens back in 1929.

It is too far out from the Boxing Day start for long-range weather rumblings, but if the S&S owners had their way they’d order reaching or headwinds with a reasonable sea state on the side. The planing boats, particularly the TP52s, have surfed away with the elusive Tattersall Cup for the past four years and if another decent summer nor’easter blows the bumper anniversary fleet southwards, chances are the modern boats will again prevail on corrected time results.

Lindsay May’s Christmas wish from Santa is “for Love and War to see an upwind race in a seaway – that’s when she’s a rocket ship for handicap”. It’s yet to be determined who’s been naughty and who’s been nice. 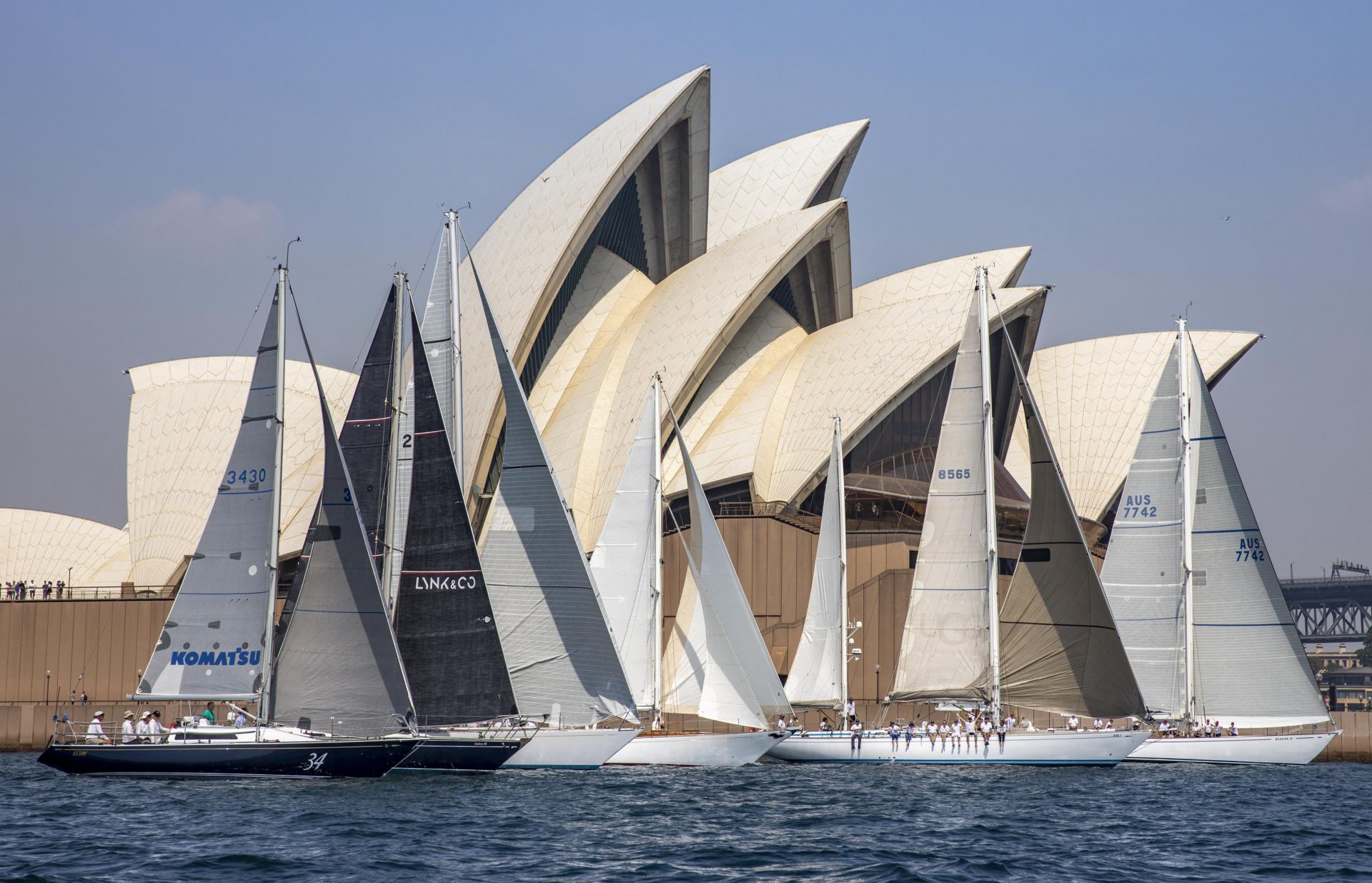 Background: The 2019 fleet will be chasing line honours and the overall Tattersall Cup win in the 628nm Rolex Sydney Hobart Yacht Race which starts December 26, 2019. From Sydney Harbour, the fleet sails out into the Tasman Sea, down the south-east coast of mainland Australia, across Bass Strait (which divides the mainland from the island State of Tasmania), then down the east coast of Tasmania. At Tasman Island the fleet turns right into Storm Bay for the final sail up the Derwent River to the historic port city of Hobart. 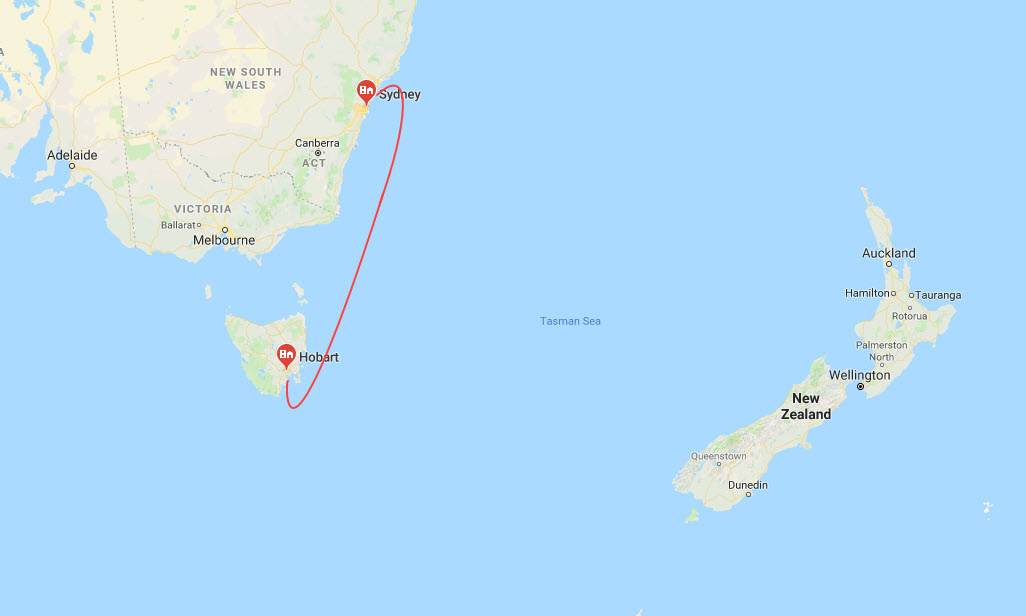