Slowing sales raise concern over level of inventories with companies

Reduction in net sales growth has raised concerns over the level of inventories with companies. This is because the data on sales comes in the backdrop of an increase in the average number of days companies took to clear their inventory (called days’ sales of inventory).


Days’ sales of inventory had fallen at the beginning of 2019-20 (FY20), indicating improving sales momentum, but reversed in September, rising to 45.7 days compared to 44.5 days in March. This is based on a sample of 196 S&P BSE 500 companies (excluding financials and oil & gas) with continuous data since at least September 2009.

Net sales growth for the quarter ended December (Q3FY20) was 4.5 per cent on a year-on-year (YoY) basis for companies that have declared their results so far, compared to an 8.4 per cent rise in the first half of the financial year. This indicates that there could be a further rise in days’ sales of inventory.


The data on companies’ inventory, a balance sheet entry, is only reported on a half-yearly and annual basis and is not available for Q3.


Indian corporate houses could not cut inventory levels in line with lower sales growth seen in September, despite the fall in capacity utilisation, said Deepak Jasani, head of retail research at HDFC securities. “December quarter could be flat in terms of YoY sales and, hence, unless inventory levels have corrected, the ratio would continue to be adverse,” he said.


The inventory turnover ratio, a measure of how well companies turn inventory into sales, fell to 8 in September 2019 compared to 8.2 in March. A higher ratio indicates that a company is selling goods faster.


The Reserve Bank of India noted in its Monetary Policy Committee (MPC) meeting that capacity utilisation was at 68.9 per cent in the September quarter, dropping from 73.6 per cent in the previous quarter. Seasonally adjusted numbers also showed a decline. 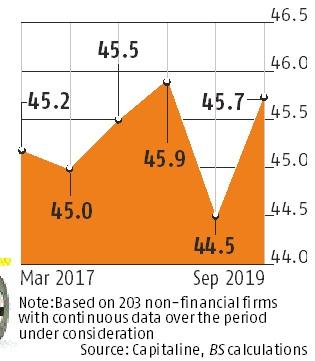 “Seasonally adjusted CU (capacity utilisation) also fell to 69.8 per cent from 74.6 per cent during the same period,” RBI said, according to the minutes of the MPC meeting. Apart from sectors like pharmaceuticals and steel, auto is among the sectors that contributed to higher inventory levels, accounting for over 15.5 per cent of the total value of inventory in the corporate sector.


The transition to Bharat Stage (BS) VI emission norms requires automakers to manufacture vehicles with lower particulate emissions. This requires engine tweaks that make their old inventory obsolete, leading to the possibility of selling existing inventory at a discount.


This could lead to a temporary spike in sales, according to Abhiram Eleswarapu, head of India equity research at foreign brokerage firm BNP Paribas Securities India. All the old stock must be sold by April 1, 2020.


“In autos, we’ve had a prolonged slowdown already, but the call is whether it will recover sharply or not. Looking at this inventory situation, we may probably see a sales recovery because if there is a fire sale (or big discounting) what happens is that many buyers’ reschedule purchases and you’ll see a false uptick and immediately followed by sales decline,” Eleswarapu said.


Jasani added that there are indications of overall improvement from January. Things could go back to better levels if the trend continues, according to him.


Others are hoping that the Budget will provide some succour. Foreign brokerage Jefferies India noted that the market seems to be pinning hopes on what the finance minister may do for a recovery, according to its India strategy report, authored by equity analysts Somshankar Sinha and Piyush Nahar.


“The markets hope that India’s Budget will bury the macro gloom with magical fiscal stimulus. Personal tax cuts may achieve little, though, and GST (goods and services tax) cuts look unlikely, leaving higher spend as the likely source with an emphasis on infrastructure,” the report said.


It has, however, maintained a defensive stance on Indian equities.