It is evident that emerging technological innovations driven by the fourth industrial revolution (4IR) have the potential to overcome the structural weaknesses of current agricultural systems and as such, to deliver a more productive, competitive and sustainable outcome, based on a more precise and resource-efficient approach.

The expectations are high that smart farming will change agriculture positively, while bridging the gap between large- and small-scale farmers, not only in developed countries but also in developing countries.

The yield levels of domestically-grown food crops, except for rice, have stagnated for more than a decade at unimpressive levels even by the standards of developing countries. Therefore, domestic production will not be able to meet national requirements even under present levels of per capita food consumption. As the population grows at approximately 1% annually and real per capita income is rising at 4.7% per year, the national requirement for food will also be rising constantly in the years to come. 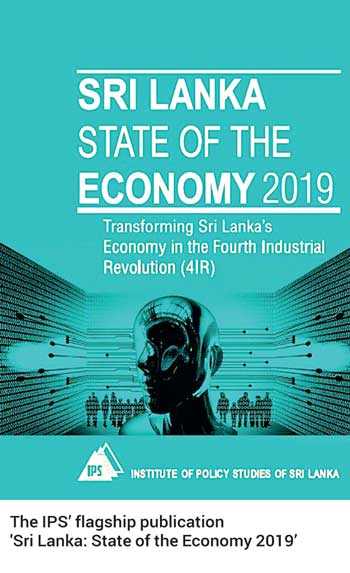 A possible solution to this problem from the domestic production front should come through yield improvement. However, data indicates that the rates of growth in average yields have declined in recent times, and growth in production is mainly due to expansion in land area. The latter will be somewhat impossible in the future due to land constraints.

Agriculture survives due to direct and indirect support measures provided by the Government such as free irrigation, a large fertiliser subsidy, support prices for rice and ad hoc trade protection measures for selected crops. The economic costs of these measures are a reflection of the unsustainable and misdirected measures adopted by successive governments to achieve self-sufficiency in domestic production. In a bid to overcome such disruptive drivers, Sri Lankan agriculture too has seen a number of technological transformations over the past decades, albeit on a fairly limited scale.

While the agriculture sector has not seen many high impact and medium impact technologies as yet, different initiatives taken by the Government as well as private agribusiness firms to improve production in an efficient and sustainable way are commendable.

The yield levels of domestically-grown food crops, except for rice, have stagnated for more than a decade at unimpressive levels even by the standards of developing countries. Therefore, domestic production will not be able to meet national requirements even under present levels of per capita food consumption

The Department of Agriculture (DOA) and other relevant organisations have already initiated several e-agriculture programs that include interactive ICT and mobile platforms, software applications, etc. to disseminate agriculture information. Meanwhile, a seed and planting material management information system, progress monitoring system for the National Food Production Programme and a QR code system for a good agricultural practices (GAP) certification program are under development.

Digital transformation is extremely essential for Sri Lanka’s agriculture given its significant role in the economy as a contributor to GDP, employment, food and people’s income. Yet, the sector faces a growing number of challenges and constraints that include low productivity, poor product quality, climate change, etc. It is very clear that Sri Lanka is lagging behind with the introduction of 4IR technologies in agriculture in relation to ongoing developments in the field.

Moving away from traditional and old-fashioned farming and towards high-tech agriculture can be identified as a positive step for the country’s agricultural development.

Since Sri Lanka is still a developing country, more research and development (R&D) needs to be carried out to improve the use of modern technologies. Both the Government and private sector involvement in R&D in technology should be strengthened by collaborating with more foreign institutions as well as with local universities. The country’s marginal farmers may not be able to use these sophisticated technologies as yet. Hence agriculture companies need to implement these at the field level. Farmer participation in technology usage can also be strengthened through contract farming systems.

Smallholder farms are a crucial part of food systems and rural economies, and will play a major role in sustainable food systems in the future as well. However, their lower resource endowments such as a lack of capital and other resources, and poor access to markets and institutions – including extension services – may affect them and put them at a disadvantage in reaping the benefits associated with 4IR in agriculture. Thus, the Government will need to adopt a different approach for such farmers in facilitating technological transformation.