At $100 billion, the SoftBank Vision Fund is both the largest private equity fund ever raised and one of the most complicated.

On the heels of some public wounds with the likes of WeWork and Uber, I wondered why the keen interest in supply chain finance (SCF).

According to Financial News, Greensill deployed Softbank’s first $800 million investment in the following manner: $300 million went to pay off investors, $439 million to beef up capital in the bank, and the rest ($61 million) for working capital. Lex Greensill at the time cited concerns he and his board had of a bearish economy and hence wanted to beef up capital to be used as a warehouse to hedge against trade credit demand.

Given we are long in the tooth in the credit cycle, a credit market that has been prompted up by permanent quantitative easing from the Fed, Japan, ECB, etc., you wonder why now? How are these supply chain finance companies raising cash from SoftBank?

Maybe an illustrative slide used by SoftBank to show how they will turn around WeWork tells all. This one was the most eye-catching and was titled “Hypothetical Illustration of EBITDA.” 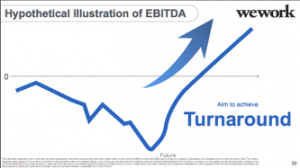 So my guess with the pitches for supply chain finance went something like this. (Note: I am borrowing from Bob Solomon’s piece.)

The opportunity for early pay is staggering, considering that:

I would also add that all the noise you hear about funding gaps creating haves and have nots. For example, according to the World Bank, more than 50% of SMEs lack access to finance, which hinders their growth. The Asian Development Bank (ADB) uses a survey to estimate the trade finance market gap and claims that financial institutions failed to provide $1.6 trillion in needed capital.

So you see, you don’t need much in the way of a pitch to get your hands on significant money. There’s even a behind-the-firewall story on Business Insider how C2FO did this with no pitch deck.

Part of the answer may lie in just how SoftBank is constructed. According to Dan Primack, business editor for Axios, sovereign wealth funds from Saudi Arabia and Abu Dhabi control $75 of the $100 billion, and their commitments are structured in two parts:

7% is a pretty big nut to hit in any day, but especially in this time of ZIRP and NIRP. That kind of structure is attractive to anyone. Primack went on to say that of the $1.6 billion in coupon payments to date, only $400 million has come from distributions (Flipkart and Nvidia). The rest came from capital calls from outside LPs (that’s the equivalent of paying yourself).

In sum, I am not trying to say that SoftBank should not invest in supply chain finance, and am only surmising the reasons why above. I reached out to them to try to better understand what due diligence they have done to make these substantial investments and am still waiting for a reply. The Business Insider article certainly implies a limited amount, and the presentation on WeWork post IPO disaster was also not a good data point. But these investments could prove to be incredibly valuable over the next few years, as access to liquidity tightens up as many believe.

Interesting space to watch for sure, especially when the Big Boys enter.

David Gustin runs Global Business Intelligence, a research and advisory practice focused on the intersection of payments, trade finance, trade credit and working capital.  He can be reached at dgustin (at) globalbanking.com