Whether it be Bowery Farming backed by Google’s parent company Alphabet, Square Roots which was founded by Elon Musk’s brother Kimbal, or the innovative startup InFarm with leafy green-growing modules installed in supermarkets, vertical farming is a fertile space for development right now.


Australia may have one of the world’s lowest population densities and plentiful farmland, but as farmers know all too well, water is and will continue to be a great challenge for the country’s food supply.


Innovations abound in the sector, most notably Sundrop Farms in South Australia which has become a global leader in sustainable agriculture by powering its greenhouse with solar power and sourcing irrigation from desalinated seawater.


Now another Australian company Stacked Farm is set to join the ranks of innovators pioneering food solutions for the future.


This means Stacked Farm’s urban-grown produce from Burleigh Heads will be supplied to casinos, in-flight airline catering and retail outlets around the country, with plans for expansion with new facilities in 2020. 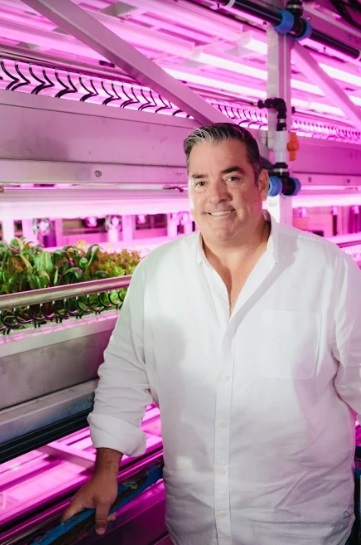 A spokesperson for the company says the facility is likely the first of its kind in the world to be fully automated.


“Other vertical farms might have a component of automation but one or two components are done by hand whether that’s seeding, cutting or packing,” she says.


Stacked Farm CEO Conrad Smith (pictured) says the farm is commercially viable, scalable and competitive, from seedling through to packaging with leading-edge technology.


“A good crop is not weather dependent and can be grown using up to 95 per cent less water than conventional farming. It eliminates the use of pesticides and other climate related hazardous processes as the growing is fully contained and controlled,” says Smith.


“We also take sustainability very seriously and renewable power is already contributing up to 30 per cent of what it takes to power the farm.”


“Drought has wiped out so many primary producers in the country. Water is always going to be an issue in Australia it’s our most valuable commodity. Vertical farming can help support our farmers in times of drought or crisis.”


Efficient water usage is just one of the sustainable aspects that makes this operation appealing to food wholesalers in Australia. Produce growth is fast and shelf-life longer, with the entire process from seed to bag taking only 16-21 days.


“Produce life is increased due to the controlled growing environment, the technology and the fact it’s packed within seconds of harvest and there’s no need to wash it – which can be a big degrader of product quality,” he says.


“It’s great for growing in the city, as we can deliver within kilometres of the produce being grown, not like most farms who rely heavily on lengthy transport distances.”


While the current facility can produce a couple of tons of produce a week equating to a 20-acre farm in output. Smith doesn’t see this as working against traditional agriculture but rather as a means to complement it.


It’s a game-changer for the cattle industry. We have identified that we can grow livestock feed en masse very quickly, and again using up to 95 per cent less water. A 1000sqm vertical farm will have enough output to feed hundreds of cattle daily.”


“The impact that this could have on farming communities that are suffering through drought is enormous.”


While the production is currently focused on leafy greens, herbs and livestock feed, Stacked Farm is also working with the CSIRO to develop additional products suited for indoor vertical farm growth.


Discussions are also underway with property owners in Victoria and Queensland to build farms suitable for produce growing, as well as a major farming operator in NSW to grow livestock feed.


In other recent horticultural news, ASX-listed Roto-Gro International announced Friday that it had made significant progress in negotiations for a joint venture with Freshero, an aspiring organic produce grower with longstanding relationships across the wholesale, retail and foodservice space in Australia, Southeast Asia and the Middle East.


The company expects to execute the terms of an agreement by the end of 2019, in a move that will see the construction of a fully automated state-of-the-art facility using Roto-Gro’s patented and proprietary cultivation technology with standard agricultural seeding and harvesting equipment.


Despite the positive news, the RGI share price is currently less than half of what it was a year ago, most likely due to the collapse of cannabis stocks to which its growing technology is also closely aligned.