Jason Perry, who operates the business started by his late father in the early ’90s, said the process has become far more time-consuming due to the pandemic’s impact on manufacturers, suppliers and shipping ports.

Rego’s and other sporting goods stores and T-shirt businesses in Stark and Summit counties have been struggling with inventory shortages and postponed deliveries.

Perry has been taking extra steps to fill orders and keep his customers informed — sports coaches, athletic directors, nonprofit groups and others in the community.

“Essentially, now it’s a perfect storm for everything to go wrong on everybody’s end,” Perry said earlier this week. 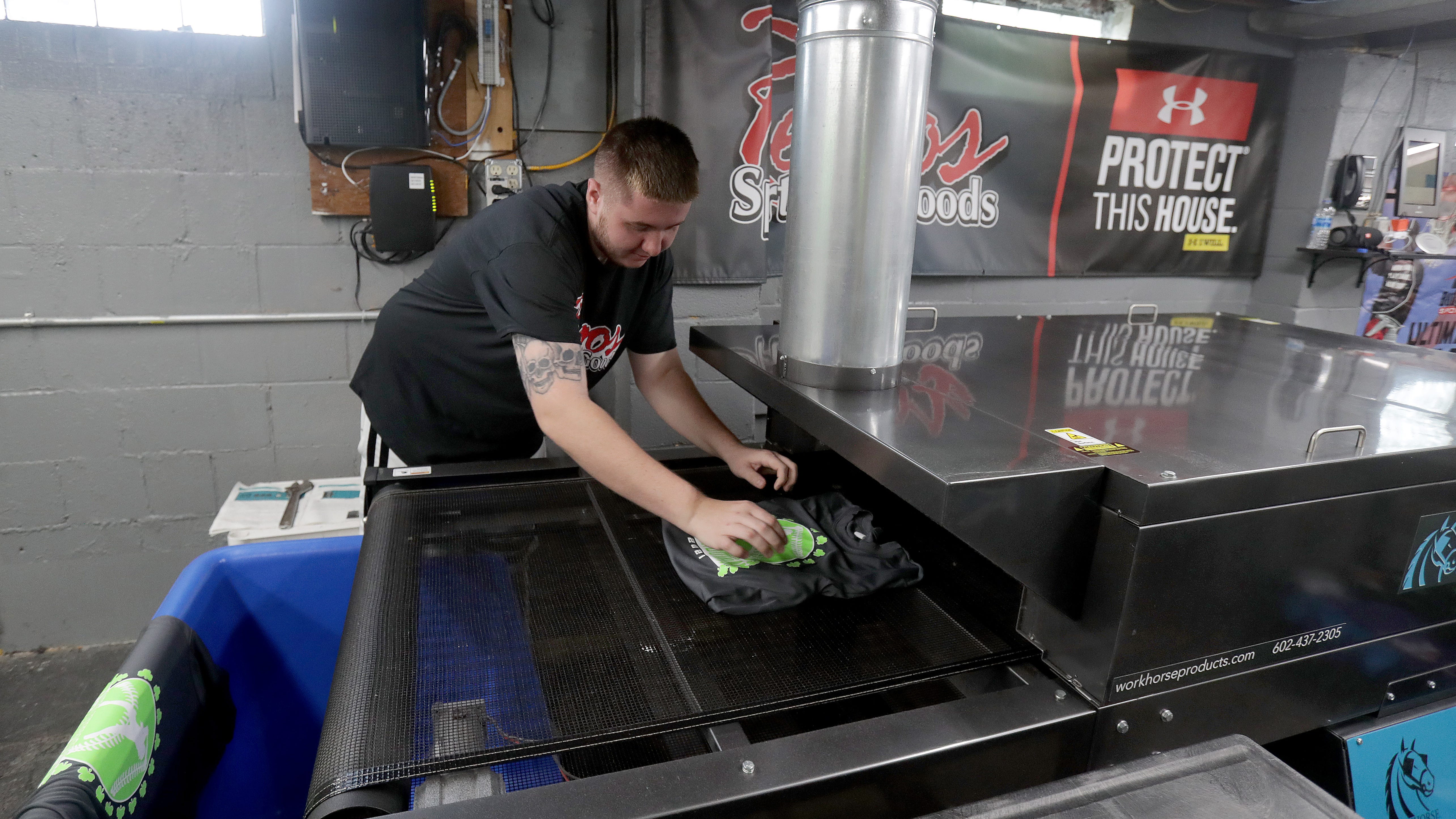 Rego’s Sporting Goods is indicative of others in the apparel industry. Logan Sports and Beatty’s Sports in Louisville are facing the same challenges.

Logan Sports in North Canton has been in business for 47 years.

“We’ve had some issues, but not anything we can’t overcome,” said Andy Logan, store president.

Logan Sports relies on more than 10 suppliers. Customers include schools, businesses and the YMCA.

“Our customers are pretty understanding,” Logan said. “If we’re out of a certain style of color (and) we change the color or change the style, it hasn’t cost us any business in that regard.”

“Especially before the holidays, it was rough finding certain colors of specific garments (and) plain T-shirts, plain hooded sweatshirts, and basically anything was a challenge.”

“You may need to order from seven or eight different warehouses,” Hane added. “If it comes from Washington state, you’re waiting a week for it to get here, so that puts everything else behind.

“… We definitely had to extend our time frame (for when) we promise things to get done.”

‘It’s been a nightmare’

Ritchie orders his products from many of the nation’s wholesale apparel companies, such as SanMar and OneStop, along with major brands like Gildan, JerZees, Adidas and Nike. All have had issues filling orders within the last six months, he said.

Laurie Greer, owner of Ts-N-Things in Akron, recently had to purchase aquatic blue T-shirts from Nevada, making them arrive days later than she can usually get them. Soon after, she needed an extra-large, safety orange T-shirt, but couldn’t find one after looking at distributors across the country.

“We need a little bit of sympathy here,” she said. “We try to work with people on the colors, but there’s only so much that we can do.”

The primary reason for shortages and delays is the supply chain, which is currently at capacity, according to Jonathan Gold, vice president of the National Retail Federation’s supply chain and customs policy.

“We’re seeing issues with businesses, both big and small, that are having difficulty getting products to the market,” he said. “It starts overseas with the foreign factories that were obviously impacted because of the COVID and have had issues getting staffed back up to be able to meet the consumer demand that we’ve seen.”

“This is really impacting everybody across the board: all industries, imports of every size and shape, even manufacturers,” Gold said. “There’s not just one piece that can fix it all, because it’s all one ball built together.”

There are problems plaguing nearly every step of the supply chain, including the portions that take place in the U.S.

Those issues include getting in and out of terminals in a timely manner and lack of equipment. For example, chassis, which are specially designed trailers used to transfer containers from trucks between ports, terminals and warehouses, are in short supply.

When Hane, of Beatty’s Sports, asks suppliers about delays, “they just tell us they’re waiting for stuff to come out of the ports, so they can restock.”

Sometimes customers haven’t gotten exactly what they wanted, she said.

“There was a time when pants were on backorder,” Hane said of a local baseball team. “But we ended up getting things on time…

“Or we talked them into switching into a different color,” she added. “It all seemed to work out pretty good.”

Michael Niezgoda, a U.S. Customs and Border Protection public affairs officer, said the agency “is essential and has remained fully staffed throughout COVID-19”

“Additionally, trade operations have not changed and is thoroughly inspected,” he said.

Keeping up with orders

Frequently checking inventory online is a routine part of the job now.

“Maybe a few more clicks it’s taken from time to time to get (orders) … but 20 years ago, it would have been talking to a person on the telephone, and they would have to look it up,” he explained.

Now “we can check inventory immediately … and can tell customers if (vendors) are limited on (particular items), and if we need to get the order in quickly.” 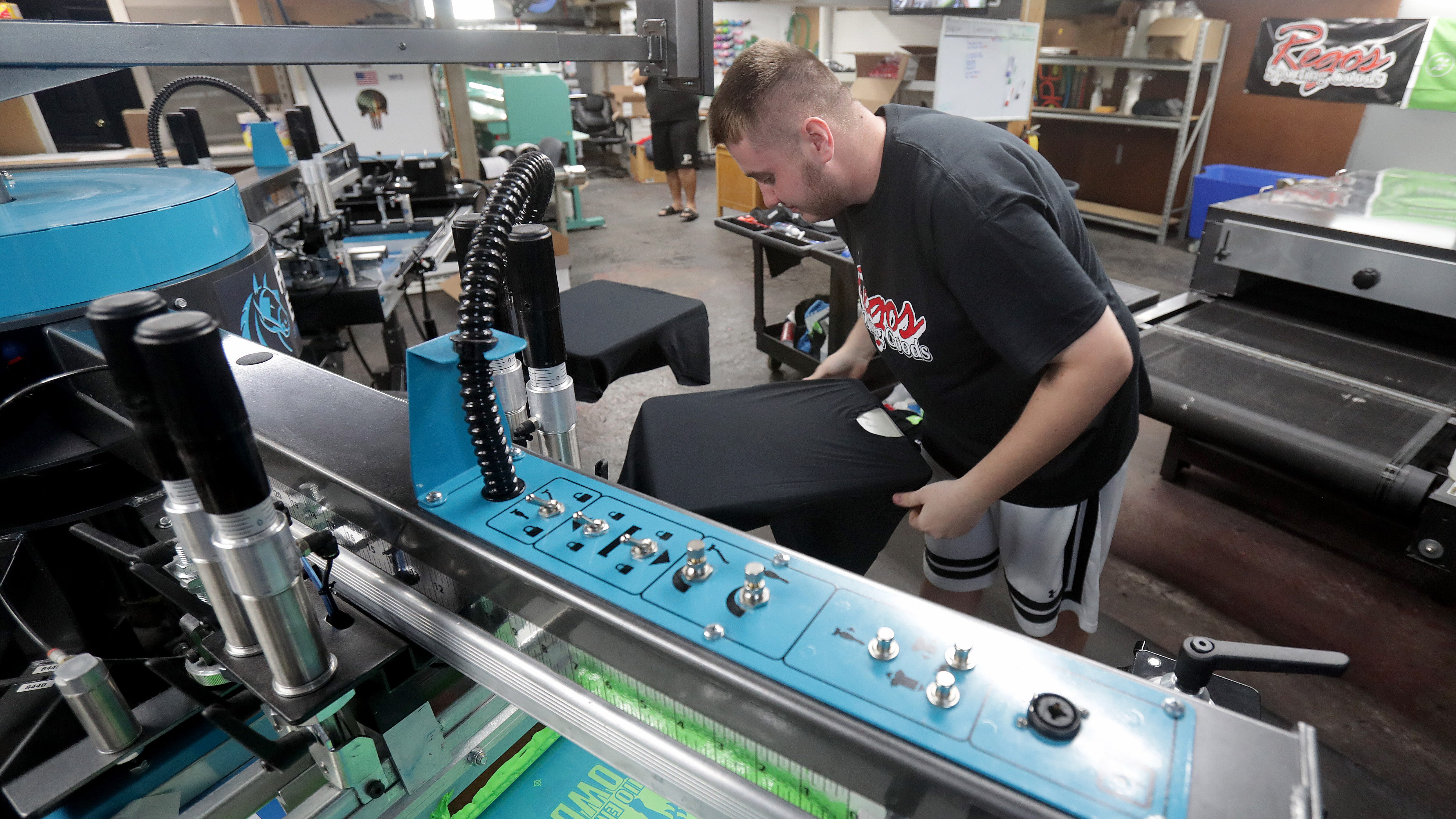 Perry, of Rego’s Sporting Goods, said the issues began in the fall.

“It started with hoodies and sweatshirts and stuff like that, and it was all colors,” he said of shortages.

Suppliers may not have red and some colors available for shirts until next year, he said. Staffing shortages have affected warehouse hours and fabric supplies, Perry noted.

“It’s a juggling game,” he said. “Someone might want this manufacturer; we might have to switch them to another manufacturer; it’s all doable — it’s just a lot harder.”

T-shirt and sweatshirt orders are important for local fundraisers, he noted.

“These groups were not able to raise money last year (with car washes and door-to-door sales), so a lot of them relied on the online fundraising we do,” Perry said.

Perry also praised his customers for their patience and understanding.

“I feel bad for everyone involved because it is tough, and no one knows when it’s going to come back inventory-wise,” he said.

“He really makes it easy and he communicates well,” McIlvain said. “… We did have some tops that we ordered that there were some shipping delays, but I’d say overall the impact for us wasn’t great.

“I think sometimes you just got to be understanding,” he added.

More significant delays include a Perry Township football-related order, Perry said. A delivery date has been pushed from July to October.

“This could go into 2022 with all kinds of different things,” he said, noting ball caps are often in short supply.

While on vacation, Perry called the coach. “I gave him options and said let’s plan out option A, B, C and D.”

Exchanging emails, the coach and business operator settled on one of the alternatives.

“Option B was good,” Perry said.

Tawney Beans, staff writer at the Akron Beacon Journal, contributed to this report