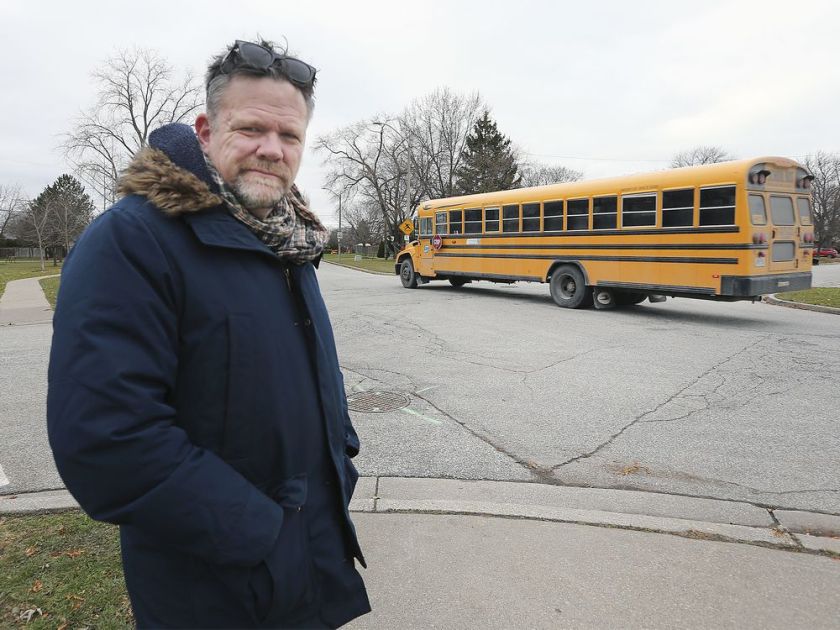 “A real problem.” Christopher McNamara, shown Nov. 28, 2019, at the intersection of Little River Boulevard and Grace Road in Tecumseh, says it’s not fair that school buses no longer allow students to bring onboard any items too big to fit in a backpack.

Unless it fits in a backpack, it’s not allowed on a school bus.

That’s the rule suddenly confronting elementary and secondary students who rely on the big yellow vehicles to get to and from school each day. If they have sizable musical instruments, sports equipment or science fair projects — anything larger than a book bag — they have to find another mode of transportation.

Tecumseh resident Chris McNamara told the Star his 14-year-old son recently witnessed a run-in with the policy. Students carrying enclosed instruments onto the school bus home from Tecumseh Vista Academy were told by the driver to take the items back to school and board without them.

“It’s clearly a problem,” said McNamara, who also serves as an advisory member of the Windsor Symphony Orchestra’s education board. “If kids aren’t even able to take their instruments home how are they going to get their homework done and their practice in?”

The policy has existed for some time, but school bus drivers began to strictly enforce it in September, according to Scott Scantlebury, public relations officer for the Greater Essex County District School Board. The large-item prohibition stems from a guideline under the Ontario School Boards’ Insurance Exchange (OSBIE), he said, and affects all bus companies in the local boards’ transportation consortium.

“The transportation consortium has recently told all their providers that they should enforce that rule, that guideline,” Scantlebury said.

It’s an issue of safety, he said, noting OSBIE’s rationale that loose objects, “such as your average French horn,” could become projectiles during an accident.

“Something like a tuba or even a hockey bag would become an obstacle in the safe exit from a bus in the case of an emergency,” Scantlebury added.

Stephen Fields, communications coordinator with the Windsor-Essex Catholic District School Board, confirmed the buses that serve the Catholic board are also subject to the policy. He said the board has received “some expressions of concern from parents regarding the issue.”

Currently, students could walk their large items to and from school or, Scantlebury said, they could have a parent or guardian drive them.

But some students live too far from school to walk, McNamara said. Some parents or guardians do not have vehicles.

“We already know that there’s a great deal of disparity in the abilities students have in terms of economic opportunity,” McNamara said.

“If you have a parent who has a schedule where they’re able to drive you to school and pick you up, then it doesn’t become an issue,” said McNamara. “It does become an issue for parents and children who do not have an option.”

“If they can’t have the full breadth of opportunities to do their school work, it’s a disparity issue,” McNamara said. “It has to be acknowledged and it can’t stand.”

Both Fields and Scantlebury said the issue would be addressed at the boards’ upcoming transportation consortium meeting in December.

“They (the transportation consortium) are going to talk about it in December at the next meeting because they have been getting a lot of enquiries, and mainly because it wasn’t being uniformly enforced,” Scantlebury said.

Until this school year, some drivers had been making allowances for large items on buses, Scantlebury said. That happened so often many students and parents were unaware of the policy, and students were used to taking items of all sizes on board.

Now that the policy is being more strictly enforced, “people are realizing that and it’s creating some difficulties for them,” Scantlebury said.

McNamara said he hopes to see a workaround to the rule to make things easier and equal for all students.