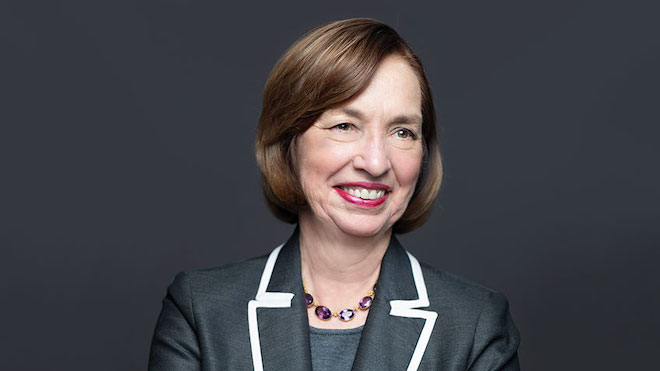 Ann Drake, a 1984 Northwestern Kellogg MBA, has given the school a “transformative” gift to create the Drake Scholars Network, which is expected to reach 5,000 women in five years. Her gift also will pay for five to seven new faculty and as many as 35 scholarships. Kellogg photo

Early in her first weeks as a student in the Executive MBA program at Northwestern University, Ann Drake met a second-year student in the hallways between classes. The woman passed Drake her business card and said, “I’m in the class ahead of you, but you’ll get to a point where you’re really going to need to talk to someone, so here. Don’t lose this.”

“And I did call her,” Drake says. “And I’ve done the same thing for others.”

Drake earned her MBA in 1984 and went on to have one of the most accomplished careers of any Kellogg graduate, becoming CEO of supply chain firm DSC Logistics in the 1990s and growing it into a global leader. She later became the first woman in the half-century history of the Council of Supply Chain Management Professionals to earn its Distinguished Service Award.

Along the way she has “paid it forward” for those at her alma mater in various ways, including occasionally passing her business card to MBA students outside classrooms. But her latest gift to Northwestern Kellogg is her most consequential and far-reaching yet. On Wednesday (February 3), the school announced that Drake had made the largest-ever gift by an alumna, which will fund a formal, global network that in the next five years will reach more than 5,000 women. The gift, the amount of which is undisclosed, will also underwrite a biannual women’s summit, the recruitment of five to seven new faculty and two full-time staff, and 30 to 35 student scholarships.

The goal, Drake says, is to launch an ecosystem that creates a permanent pipeline of female leadership.

“The women that I met at Kellogg, and other generations of Kellogg women, have assisted me — I have been helped in so many ways by women leaders in both my cohort and others, and certainly have learned from many of the classes and other leadership events that I’ve participated in,” Drake tells Poets&Quants. “My experience at Kellogg gave me not only a foundational education to transform my company, but a tight network of women who were crucial sounding boards and partners as I advanced in the logistics industry. With this gift I hope to make that possible for more women, equipping them to pursue, navigate and sustain careers that drive organizational and societal impact and create lives of personal meaning.”

‘NO ONE EVER THOUGHT OF CREATING THIS BIG A NETWORK BEFORE’ 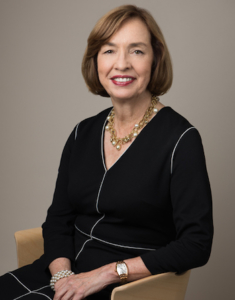 Northwestern Kellogg is a pioneer in women’s leadership. In 2001 it established the Kellogg Center for Executive Women, and more recently convened the inaugural Global Women’s Summit. Kellogg was the first elite B-school to hire a woman as top executive; Dean Sally Blount’s transformative tenure was succeeded by current Dean Francesca Cornelli, making Kellogg also the first top school to have back-to-back women deans. In research, too, Kellogg is a longtime leader: Professors Leigh Thompson, Nicole Stephens, and Maryam Kouchaki have done groundbreaking work on the impact of gender on ethical behavior and punishment for ethical violations, and professor Victoria Medvec has published seminal research on women and negotiations. In its full-time, two-year MBA program, Kellogg has been among the leaders in women’s enrollment for years, boasting one of the highest proportions of female students of any leading B-school, peaking at 46% in the class that graduated in 2020.

Ann Drake’s gift is designed to build on this legacy. The Drake Scholar Network will focus on three areas: enhanced educational programming and intergenerational network building, recruitment and retention of faculty “thought leaders” and support for their research, and continued scholarship support through the Drake Scholars program, an Executive MBA and Evening & Weekend program launched in 2017 with Drake’s $4 million gift.

Drake credits Dean Cornelli and others for sparking the discussions that led to the latest ambitious undertaking.

“This wasn’t only my idea. This was also Francesca’s idea,” she says. “We have been working on this for a long time — and she probably longer than I know. Because she’s actually the one who said, ‘What do you think?’ And I said, ‘Oh my gosh.’

Cornelli adds: “Kellogg has a long legacy of breaking new ground in the education and professional advancement of women, but there is still much work to be done to address gender-based disparities in the business world. Ann’s gift will help reinforce Kellogg’s standing as the premier global business school that equips high-potential women to become impactful, inclusive leaders.”

‘LET’S SEE WHAT WE CAN DO FOR THE GREATER GOOD’

Drake — a successful woman in the male-dominated supply chain industry — has long been a strong advocate for women’s leadership. In 2013, she founded AWESOME, Achieving Women’s Excellence in Supply Chain Operations, Management, and Education), a nonprofit dedicated to helping women network and excel in supply chain. In 2019, she founded Lincoln Road Enterprises, which seeks new ways to advance the influence and contributions of women in business, supply chain, engineering and technology, infrastructure, and design.

Her work with Kellogg goes back years, but more recently, she donated the funds to launch the Drake Scholars program in 2017 and she supported the 2018 Women’s Summit. That year she received Kellogg’s Distinguished Alumni Service Award.

“When I was in the logistics industry for the last 30 years, there were very few women, and we all sort of reached out to each other and formed little networks here and there that sort of assisted each other,” says Drake, who currently sits on Kellogg’s Global Advisory Board. “And over the years, I was also involved in other, more formal networks. I also started my own couple of networks. And when I think through where I have been helped and where I think I can make an impact, obviously one of the strongest — how shall I say it? ‘Help’ isn’t the right word — but I was greatly transformed by my Kellogg experiences, starting with the first one many years ago. And it seems like every time I interact with a Kellogg week-long course or a scholar or meet someone, they’re all special.

“We’ve had a lot of great things going on for women at Kellogg over the years. I’ve participated in some. I have a number of scholars now that are just off-the-charts women. They’re all so special. They really inspire me, which I didn’t expect. We’re not just talking about business. It’s way beyond, into all forms of society, even not-for-profit. So I see such an opportunity for women leaders to really step up across our society in so many places and at so many levels.

“Thinking about where to make an impact and thinking about all of the different levers that Kellogg has, from alumni to faculty to research to students — this is what inspired me to say, ‘Let’s just jump-shift all this wonderful work that has been going on and that I have experienced myself, and let’s see what we can do for the greater good and to help make the world a better place.’ I’d like to think that Kellogg leaders are everywhere making things happen in powerful leadership positions, and that women are right up there.”

Inspiration for the Drake Scholar Network’s structure came from the research of Brian Uzzi, a Kellogg professor who found that success for women in business relies not only on “who you know” but on the depth of the relationships with those you know. Strong ties with female peers — support and advice from a close inner circle of women — are vital in allowing women to thrive.

“When I read Brian’s article myself, I went, ‘Oh my gosh. What a great piece of research,’” Drake says. “And this really supports what we know. For example, with AWESOME, we have said it’s a safe place. It’s a place where you can talk about anything that’s really on women’s minds that is in the way or helping them move along career-wise. It’s a way to have kindred spirits to talk to and to learn from. I could not have done what I did in my career without all of the women’s networks that have supported me and that I continue to support. So there’s a lot of us working on this in a lot of places.

“But (Uzzi) is absolutely right on. According to his research, women need similar networks to men, but they also need this special network, where I can just really talk about what happened to me last week, or what you do when your board member asks you to do this, or how you research that, how you prepare for your latest interview with the CEO who’s considering you for CEO in the next five years. I mean, any question at all. And women can really be helped by each other in these networks.”

The groundwork has already been laid by the scholars program Drake funded four years ago, says Drake Scholar alumna Dawn Cornelius, a Kellogg Class of 2020 MBA.

“Joining the Kellogg alumni community is a monumental and significant moment in my life and career,” said . “It has meant access to a network of incredibly talented individuals who have helped me navigate issues in my current work or solutions for launching my next venture. Being a Drake Scholar gave me the opportunity to complete my Kellogg journey. I continue to be grateful for this support and distinction.”