The Mets entered the offseason, knowing that one of their biggest needs was improving a bullpen that posted a 4.99 ERA during the 2019 season.

To this point, all they’ve done is re-sign right-hander Brad Brach, sign righty Michael Wacha (though he was told he would start, looks like the pen for now), claim lefty Stephen Gonsalves, and give lefty Chasen Shreve a minor league deal. No, Brodie, Seth Lugo and Robert Gsellman pitching in the pen doesn’t count as adding pieces.

Top of the market arms like Drew Pomeranz and Will Smith came off the board early. The likes of Chris Martin, Kevin Gausman, Blake Treinen, Joe Smith, Jake Diekman, Tyler Clippard, and Junior Guerra have been scooped up as well.

The two top arms left are right-handers Dellin Betances and Will Harris. While it was reported the Mets had early interest in Betances, it’s been noted that he’s asking for a one-year, $10 million deal and that Mets aren’t likely to meet that price tag. There’s been no reports tying the Mets to Harris at this point. This also makes me think they are likely out on Daniel Hudson as well, another pitcher in that upper tier of arms left.

Let’s take a look at what else is on the free agent market for the Mets to pick from.

His velocity was right around the same for both years, with fastball going down 0.3 MPH and splitter up 0.5 MPH. The Japanese veteran had his hard hit rate drop 5.0 percent this season and and his soft hit rate went up 4.5 percent.

Hiriano threw a splitter 51.7% of the time last year, and it was tough on the league, they hit only .203 with .280 SLG against it. He had a 39.6 whiff percentage on the pitch. The biggest reason for the uptick in runs scored against Hiriano can likely be attributed to teams crushing his fastball to the tune of .310 AVG with .552 SLG. Digging into the fastball numbers, you can see that Hiriano used his fastball down in the zone much more in 2019.

Yoshihisa Hirano threw his splitter 51.7% of the time last year and the league struggled with it (.239 wOBA, 39.6 whiff%). pic.twitter.com/edmPtGr4TA

The former Marlins closer has pitched in variety of different roles during his 10-year career, including 73 saves combined between 2013 and 2014 and pitching in a combined 150 games over the last two seasons.

He remains mostly a sinker/slider pitcher with his velocity holding right around 91 MPH for his fastball and 79 with his slider over the last three seasons. The 33-year-old was able to limit hard contact in 2019, with his exit velocity and hard hit% both ranking in the 99th percentile according to Baseball Savant.

The 35-year-old threw his sinker 70% of the time last year, resulting in a groundball rate of 55% (20th among 158 qualified relievers) and allowing only five home runs. 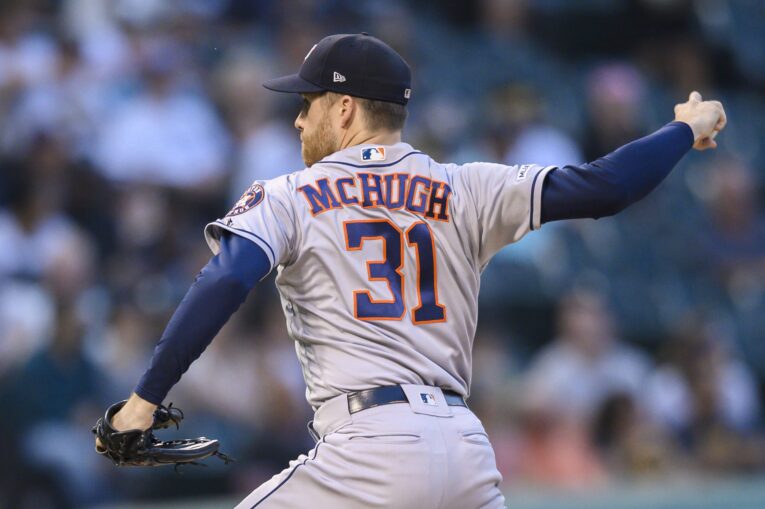 McHugh would give the Mets flexibility out of the bullpen and rotation depth, while likely not costing much. He was in the 92nd percentile this past season in hard hit % and the spin on his curveball was in the 88th percentile.

Craig Stammen, RHP – The former Washington National has been a workhorse over the last three seasons, his 241 1/3 innings pitched exclusively out of the pen, are the second most in the major during that span. During that time, he had a 3.06 ERA, 3.92 K/BB, and 1.13 WHIP.

Arodys Vizcaino, RHP – This would be more of a long-term type move as Vizcaino had surgery in April to repair a torn labrum and remove scar tissue in his right shoulder. More and more teams have been signing players coming off injuries early so that they can monitor the rehab process.

When healthy, Vizcaino had a 2.95 ERA, 1.28 WHIP, 50 saves, and 10.2 K/9 for the Braves in parts of six seasons. The 29-year-old would be a low cost signing that has solid upside. Right-handers Tommy Hunter and Pat Neshek are two other names to consider when talking about solid relief arms that finished the 2019 on IL, but are expected to pitch in 2020.

The down year broke the string of five straight seasons with an ERA lower than 3.00 and seven seasons of having a HR/9 below 1.0. Another worry sign for Strop’s season was seeing the velocity dip on his fastball from 96 MPH to start the season to averaging 93.85 MPH in September.

Francisco Liriano, LHP – Would give the Mets another lefty in the pen to go with Justin Wilson. The former top Twins top prospect had a 3.47 ERA in 70 innings for the Pirates in 2019. He allowed only 7.7 H/9, though he struck out only 8.1 per nine innings and walked 4.5. Statcast had his exit velocity in the 98th percentile and hard hit % right there in the 96th percentile.

Of course, the Mets should really sign one of Betances, Harris, and Hudson, then still potentially add one of the other names I’ve listed.