So, Contracting Authorities must respect these threshold amounts when awarding any public contract.

Public contracts which are subject to the European regime fall under the European rules relating to publication, stipulations in contract documents, opportunities for appeal, etc.

Thus, contracts of a value equal to or above the European thresholds will be subject to European publication.

This applies to contracts viewed as a whole, if they are not divided up, and also to the contracts or lots into which they are divided. This means that the contract must be published in the Official Journal of the European Union and in the “Bulletin der Aanbestedingen” (Belgian Bulletin of Invitations to Tender).

Contracts with an estimated value below the European thresholds, are subject to Belgian publication. In case of procedures where publication is prescribed, these contracts are only required to be published in the “Bulletin der Aanbestedingen”.

In addition, the European threshold amounts are, amongst others, used as a reference for the application of certain award procedures.

For instance, public contracts for supplies and services with an estimated contract value below the European threshold may be awarded by competitive procedure with negotiations, or by simplified negotiation procedure with prior publication.

The European threshold amounts for public procurement for 2020-2021 (excl. VAT) are shown in the table below: 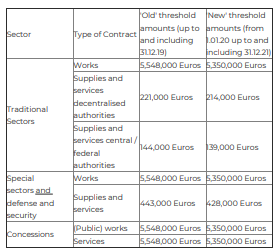 For the first time since 2010, a reduction of the threshold amounts was introduced, and, in other words, a tightening of regulations.

The new threshold amounts are applicable from 1 January 2020, and are, as usual, fixed for a period of two years. They therefore apply up to and including 31 December 2021.

The new amounts will have to be implemented into Belgian regulations by means of a Ministerial Decree amending the various Royal Decrees passed in implementation of the Public Procurement Law (and the Concession Law).