It should be the busiest time of year for truck drivers like Gerald Rogers at the Los Angeles docks. Instead, they’re scrapping over leaner cargoes thanks to the trade war.

Rogers, 35, said last year he was shuttling as many as four loads a day between the port and its storage facilities. Now it’s down to two — if he’s lucky. “The tariffs have changed the landscape,” he says. “China isn’t shipping as much, it’s cutting back on manufacturing. And when the loads don’t come, there’s not enough work for all of us.”

The U.S.-China pact announced last week has taken tensions in the 20-month trade conflict down a notch, but its effects are still rippling through the economies of the main protagonists — and the rest of the world, too. For drivers at the Port of Los Angeles, America’s top gateway for Chinese trade by sea, it’s meant smaller and less predictable paychecks — and the normal seasonal patterns turned upside down. 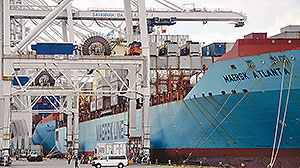 Port of Savannah by Markus Rauchenberger/U.S. Army Corps of Engineers

Container traffic has been slowing since about midyear, just when it would usually be strongest to meet back-to-school and holiday shopping demand. And the latest deal keeps tariffs on hundreds of billions of dollars of Chinese goods, leaving port truckers uncertain if flows will return to normal.

Rogers says the past year has taught him that business can turn on a dime. In 2018, the twin harbors of L.A. and Long Beach were breaking records for cargo — and that was because of the trade war, too.

“There was a big boom because the shippers were getting everything in before the tariffs,” says Rogers.

This year, they didn’t repeat the move — wisely, as it turned out, because President Donald Trump canceled tariffs that were due to kick in Dec. 15 as part of the phase-one trade deal. So the port’s truckers have gone from overstretched to in some cases feeling underemployed. There’s not enough work to go around, and competition between drivers is “cutthroat,” Rogers says.

Spot markets for truck freight — where customers move loads at short notice — reinforce his view. Since August, West Coast volumes have been “considerably lower” than in the rest of America relative to their normal levels, according to Avery Vise, vice president of trucking at industry research firm FTR.

“A lot of drivers have come to expect a certain seasonality, and they budget by that,” Vise says. “Before, you could see bad things coming because it had more to do with how the rest of the global economy was doing — and there was a warning. But now there are shifts occurring because of trade policies that are unpredictable.”

The Cass Freight Shipment Index — a monthly measure of trucking, rail and air freight volume — recorded a 3.3% year-over-year decline in November, marking a year of negative readings. Volumes may begin to level off, “but not surge much” from next year, Cass said in a statement Dec. 19.

Hector Padilla, 35, followed his father into the trucking business a decade ago, partly because he grew up loving the “smell of diesel.” Around this time of year, he’d usually be exhausted. But “the what-they-call peak season has been a small whimper,” he says. “It hasn’t been the big roar of other years.”

Padilla finds a lot of his work using apps like NEXT Trucking, an online platform that connects small-fleet drivers with jobs. That market has another risk to worry about besides the trade war: a new California rule set to take effect Jan. 1 that could force companies to replace contracted gig-economy workers with employees. Padilla says it may impact owner-operator drivers like himself.

To be sure, there’s still plenty of work at the twin ports, which process more than a third of America’s containerized imports and support 192,000 jobs in the immediate area. Padilla says he’s upbeat about the future because “California ports have the infrastructure, it’s a gateway for the country.”

But that status isn’t set in stone. Supply chains are shifting from China to other Asian manufacturing nations, and even some European ones, while East Coast ports are making investments that are boosting their competitive edge, according to Weston LaBar, chief executive of the Harbor Trucking Association. The group represents most of the 13,000 drivers that ferry cargo at least once a week in and out of the southern California ports.

Rogers says he’s hoping Trump’s new trade deal will smooth things out. But “what I’m hearing from the Chinese shippers is that it’s an irreversible change,” he says. “This might be the outcome for years to come. We shouldn’t expect things to resume to normal.”

With assistance from Wei Lu.