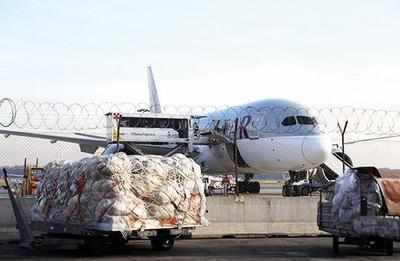 Regular bookings of cargo would start from July 15

Prayagraj: After receiving the nod form the Bureau of Civil Aviation Security (BCAS) for handling cargo services from Civil Enclave, Bamrauli, the Airport Authority of India (Prayagraj region) authorities have decided to start the service on an experimental basis.
Initially, cargo booked from the airport by local businessmen would be delivered at their final destination via passenger planes.
A proposal for starting cargo flight connectivity between Prayagraj and other cities in the country was sent to BCAS in November last year. After getting the green signal from the security bureau, the cargo service has now been started.
Although the cargo is presently being transported through passenger aircraft only, in due course service providers including Indigo and Alliance Air, a subsidiary of Air India, would be operating sole cargo flights to and from the city. However, this would greatly depend on the volume of cargo that is booked to and for the city.
Local businessmen have expressed happiness despite the fact that presently it is a trial run and regular bookings would start from July 15.
The airline companies are still making the assessment of the volume of business that the Sangam city would have in offing, depending on which operation of a full-fledged cargo service would be introduced in the city.
Presently, the cargo is being transported by passenger flight to cities including Pune, Mumbai, Bengaluru, Raipur, Delhi, Bhubaneswar, Dehradun, Gorakhpur and Bhopal. Besides, Alliance Air is also operating for Delhi and Bilaspur and taking cargo bookings.
The cargo facility from the city has been made possible after the active involvement of UP minister for civil aviation, Nand Gopal Gupta ‘Nandi’. “We have started cargo flights from the city. The facility would be of immense benefit for providing new markets, both nationally and internationally, to the products of the region very much on the lines of Varanasi, wherein veggies and fruits have found new markets in the western countries as well,” Nandi said.
Regional director of AAI (Prayagraj) Anchal Prakash said, “After the approval from the security bureau, the cargo facility is being handled by service providers operating from the Civil Enclave.”
The airport authority also plans to build a separate terminal at Prayagraj’s Civil Enclave to start a regular cargo carrier. The terminal would have all the facilities needed for handling cargo including a warehouse, entry-exit, parking, etc., to keep the goods coming and going from the city.