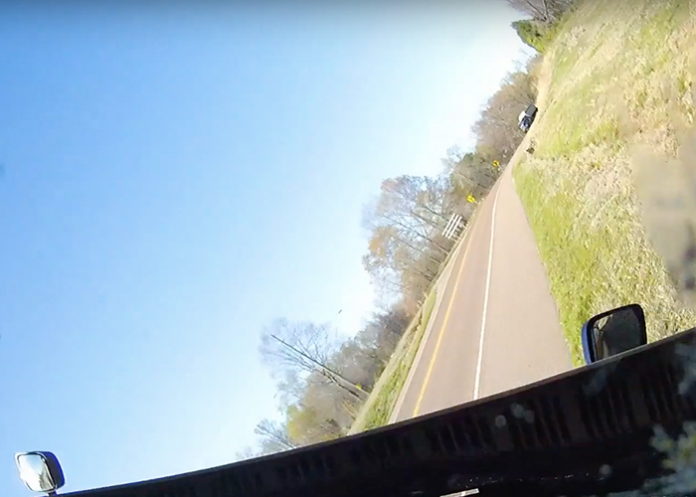 The video clip was sent in by CDLLife reader Peter, who explained the circumstances leading to the crash:

“Over a year ago in April, both my co-driver and I experienced a rollover incident. The entire truck was at the 40 ton legal limit, and it was not our first time operating a vehicle hauling a heavily loaded trailer.

There were some heavy automotive engines, with a high center of gravity, placed directly over the kingpin/fifth-wheel deep inside the trailer.

The people working at the wreck told me those heavy engines should have been loaded further away from the drive tires, towards the trailer doors.

My co-driver and I picked up the trailer with a numbered seal already applied to the door latch, with no way to tell how our cargo was distributed that day.

After an investigation, and due to what was actually deep inside the trailer without my knowledge, I was told it was non-preventable, and kept my job for another year as a company driver.

I am no longer driving, with a clean record, and mostly unemployable as a trucker, only because the official written report described it as leaving the road “first” and “then” rolling the vehicle onto the grass.

I will find a different career, but wished to share my story and dashcam footage before I move on and keep going, and really hope it helps in some way.”

Find the perfect match.
Apply once and get offers from the top trucking companies.