Tuesday was an awful day for Jim Montgomery but a bad one for Dallas Stars GM Jim Nill, too

It has never been easy to acquire and then maintain a head coaching position in the National Hockey League. The numbers show it’s getting even tougher as the Stars dismissed Jim Montgomery on Tuesday for “a material act of unprofessionalism.”

The club wasn’t more forthcoming than that, with general manager Jim Nill holding a surprise morning news conference to announce the decision to fire Montgomery less than 1 1/2 seasons into his tenure in Dallas.

This was an awful day for Montgomery but a bad one for Nill, too. You can applaud him for acting swiftly (and it would be simpler to do that if more was known about what Montgomery has been accused of). Nill said he received a phone call Sunday, conducted an investigation, met with ownership and the club’s general counsel and dismissed his coach Tuesday morning.

Nill made a point to say it did not involve past or present players, a declaration that probably needed to be made in the wake of the recent firing of Calgary coach Bill Peters. He was fired following accusations of player abuse and a racial slur made as a minor-league coach years ago.

This was not that. But what it was exactly was left to speculation, which doesn’t do Montgomery any favors if he is to have a coaching future. Nill said only that he would not comment further on whether this was a one-time event or an ongoing problem “out of respect for everyone involved.”

As Nill spoke, the New Jersey Devils skated just around the corner in preparation for Tuesday’s game. The Devils and Toronto Maple Leafs have fired coaches already this season for the more traditional reason — losing hockey games. Calgary and Dallas had other issues.

And now Nill has the issue of hoping interim coach Rick Bowness can keep the club headed in the right direction. After a league-worst 1-7-1 start, Montgomery had righted the ship and the Stars played well Saturday night in disposing of the New York Islanders, one of the league’s better teams.

Montgomery was Nill’s third hire as GM here, although, realistically, Lindy Ruff was Nill’s hire and Ken Hitchcock was owner Tom Gaglardi’s choice. Still, at the time of hiring Montgomery, Nill stated the obvious, that he needed to get this one right. Stars president Jim Lites said he had never been part of a better interview than Montgomery’s.

In a hockey sense, Montgomery was solid enough, guiding the team to Game 7 of the second round of the playoffs in his first season above the college ranks.

But even if this is a one-time event, it’s a messy look for Nill and the Stars. Teams put a lot of research into head coaching hires. Good candidates can get flagged for a variety of reasons.

Did Stars management miss something?

Nill said he had seen nothing either in hiring Montgomery or his time here to indicate that this sort of problem could occur.

It was the same for the players who were merely informed Tuesday morning that the coaching change needed to be made and not why it was happening.

“I was saying all along I was looking forward to Monty being my last coach with the Stars,” forward Tyler Seguin said Tuesday.

Seguin is 27 and has a contract that extends for seven years beyond this season. Safe to say he didn’t come close on that wish.

Nill said there was no criminal investigation related to Montgomery’s firing. He looked down at his notes to read it carefully one more time. “A material act of unprofessionalism,” Nill said. “That’s what it was.”

And like that, that’s how it ends for Jim Montgomery. Maybe he’s better served by going out this way, but it still seems unfair to leave it all to speculation. 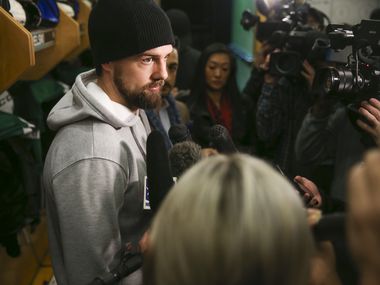