Frank Schuster, the company president who operates Val Verde with his sons Kurt and Max, has long-occupied part of the 170,000-square-foot building.

This year Val Verde jumped at the chance to move deeper into the building to help the firm increase its volume and traffic flow within the receiving-packing-shipping operation. 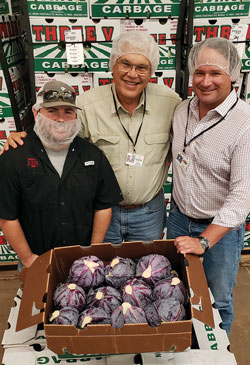 Max, Frank and Kurt Schuster. The expansion, which includes 20,000 additional square feet of cold warehousing, was scheduled for completion before the “full swing” volume of the vegetable deal ramped up about Nov. 10.

Val Verde is expanding its south Texas vegetable production to the point that only about 30 percent of the firm’s volume is imported from Mexico. “Slowly over the last seven years, we’ve expanding our farm acreage by taking back farms that we have been renting to third parties.”

Expanding the warehouse “will give us a more streamlined operation. We’ll bring greens in at one end, pack and send them to the cold room and then load out of the new addition. We will have a better product flow.” Among the warehouse improvements is the placement of a wireless service and expansion of the IT infrastructure.

Frank Schuster said, “Every year we add a new product or two.” New items for Val Verde this year are arugula and culantro.

Frank Schuster said Val Verde would begin shipping kale, mustard, cilantro, turnips, collards and other greens in mid-October. Texas-grown cabbage would be “one of the last things to get going,” coming into the market during Thanksgiving week.

Val Verde will be shipping the same onion acreage as in early 2019, beginning as early as late March 2020, running into May.

He credits his sons with key roles in the expansion of Val Verde. Max Schuster leads the farming and Kurt heads inside operations.

Val Verde is using a new vegetable planting technique, PlantTape, which involved a “very fast, less expensive” tape to place seedlings. “Last year we tried this on cabbage and were pleased with the results. This year we’ll have more PlantTape cabbage acreage and experiment with other crops.”

Cabbage, onions and collards are being added to Val Verde’s organic mix this year, to join organic kale, beets and cilantro.

How to dress like a grown up with Shane Watson: Cargo pants are back and now they’re chic