Although a massive warehouse project planned for East Hanover Township got a preliminary go-ahead Tuesday night, residents said they are not going to stop their fight to block construction.

The East Hanover Township Board of Supervisors in Dauphin County voted 3-1 to give Hanover Logistics, LLC. a conditional use permit to build two warehouses totaling over 1.1 million-square feet near the border of Dauphin and Lebanon counties.

The warehouses would be located near Interstate 81, according to the application, close to the intersection of Fox Run Road and Firehouse Road. The site of the proposed warehouses is close to a neighborhood off of Firehouse Road.

Roughly 40 residents came to Tuesday’s meeting, a similar crowd to who came to a meeting in East Hanover Township, Lebanon County in November. At that meeting, the Zoning Hearing Board denied Hanover Logistics a zoning variance that would have allowed them to build a parking lot on 17 acres in Lebanon County.

That vote means developers have to adjust their plans in order to fit the projecton the portion of the land in Dauphin County. One warehouse will now be 805,030 square feet, while another would be 317,901 square feet.

By comparison, the Farm Show Complex in Harrisburg is roughly 1 million square feet. 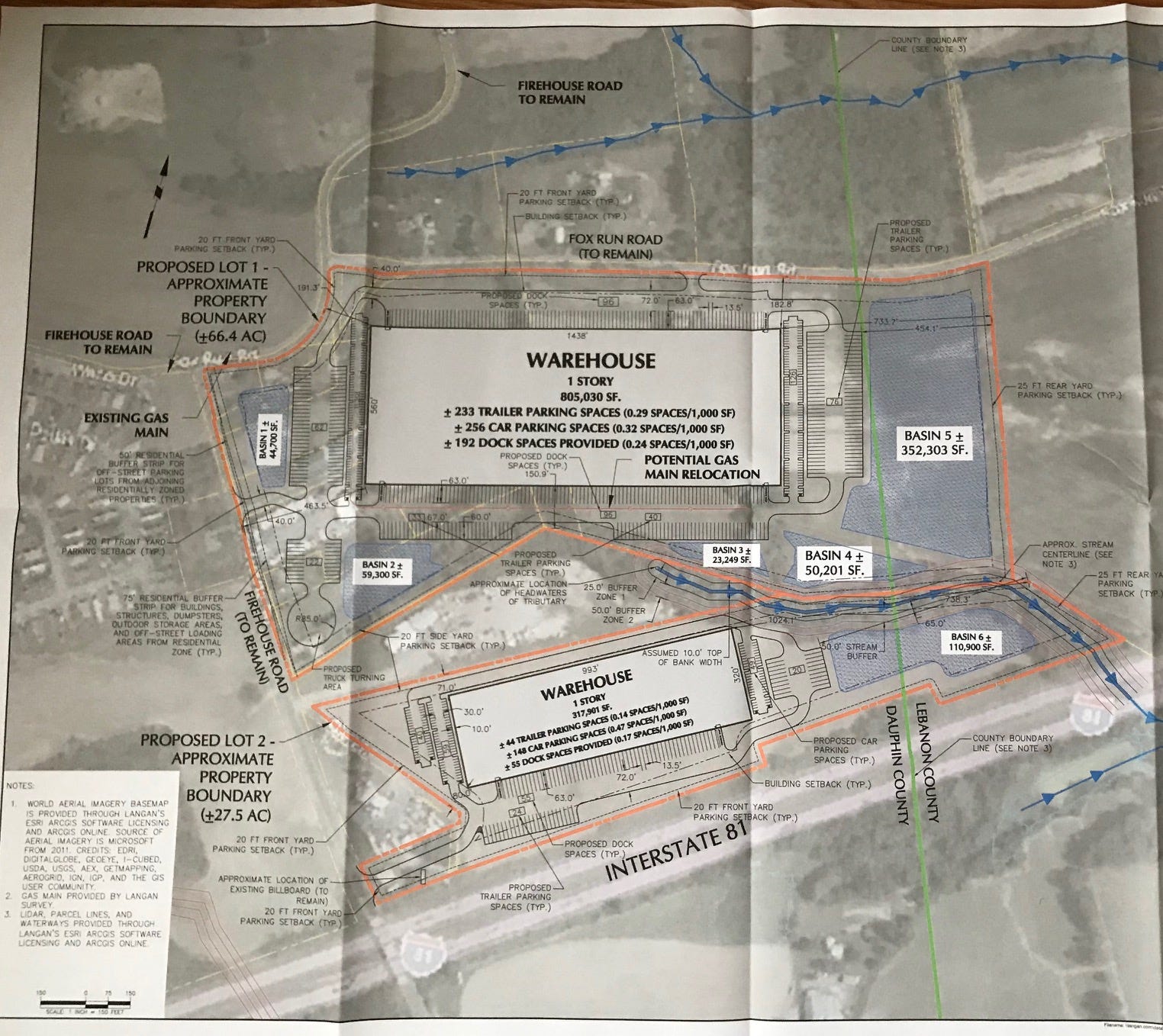 Background: Despite opposition from residents, zoning board, warehouse developers moving forward with plans

Several residents voiced concern Tuesday about the impacts the warehouse may have on local roads and traffic, stormwater runoff and their property values.

Tina Hastie, who lives nearby, said she is concerned that the noise of tractor-trailers coming and going and the lights from the warehouse will make sitting on her porch a less-than-tranquil experience.

“The neighborhood is currently very quiet and tranquil with birds chirping and frogs croaking,” she said during the meeting. “They have not shown how they will not detract from the use and enjoyment of adjoining and nearby properties.”

Charlie Courtney, who represents Hanover Logistics, said the project meets all the requirements to be granted a conditional use permit.

“All of the things that we heard are the normal effects of this type of use,” he said about Hastie’s comments.

Also of concern to residents was that an anti-idling policy that Courtney said will be part of any future warehouse tenant’s lease will not be enough to prevent trucks from leaving their engines running. If residents notice a truck idling, they would have to call the township, who would then file a complaint in district court.

Supervisor Chad Leese voted against the project because  he said the lack of enforcement would unfairly put the onus on residents to enforce the anti-idling policy.

Courtney said the proposed policy is a “few steps beyond” what is typical for warehouses.

“There’s no perfect solution, I wish there was,”‘ he said.

More: Two families lock in deal to ensure their farmland never becomes home to a warehouse 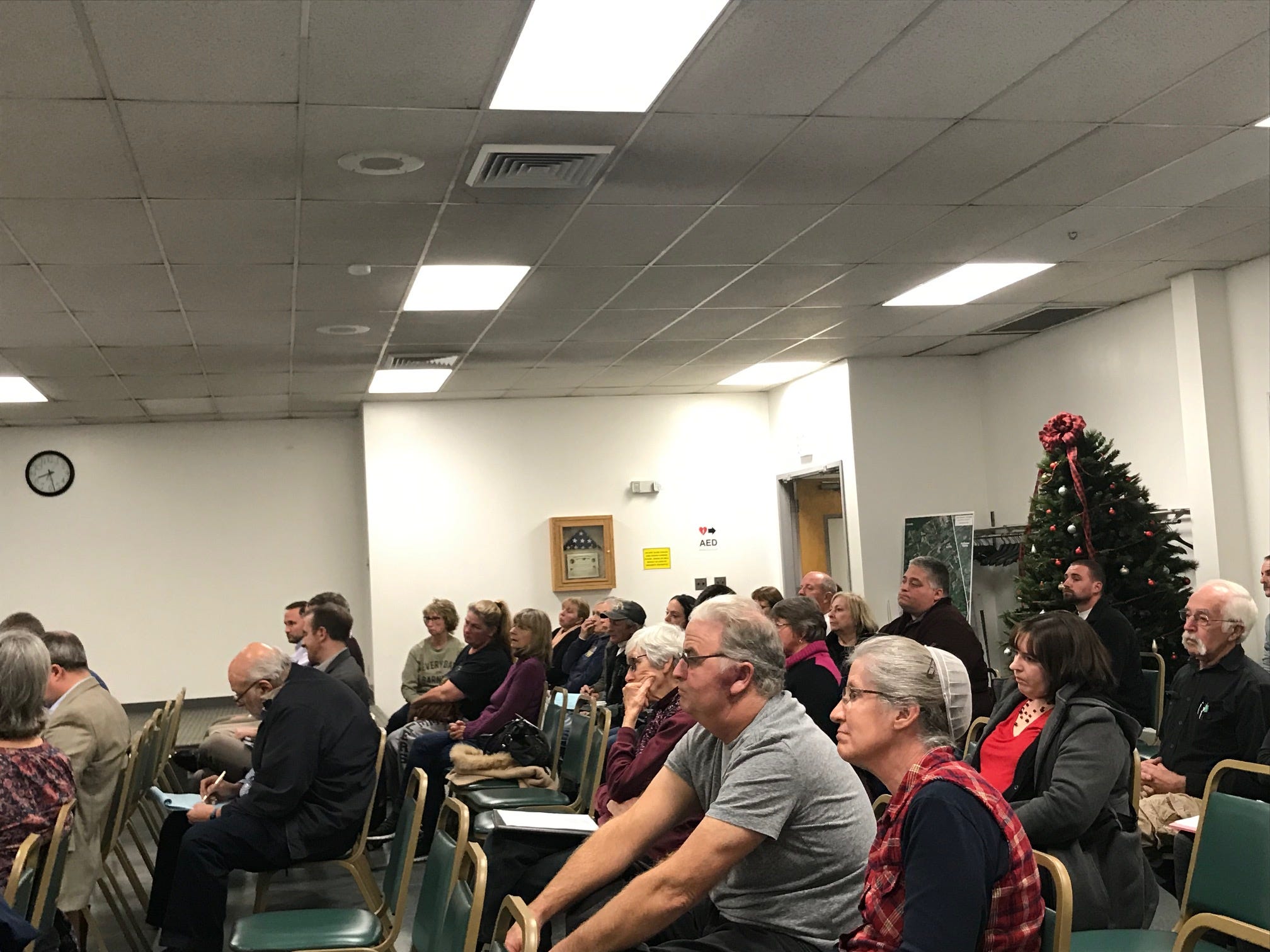 Roughly 40 residents came to a meeting Tuesday night to see whether a massive warehouse will be built near their homes. (Photo: Nora Shelly)

Tuesday’s vote gave Hanover Logistics the go-ahead only to develop the land.

Developers will now have to submit land development plans to the township which Courtney said will address concerns about traffic and stormwater management.

The Planning Commission in East Hanover Township will have to approve the plans. Courtney said they will also be working with the township on improvements to the roads around the proposed site.

For her part, Hastie said their fight “has just begun.” They are planning to circulate online and written petitions to nearby residents.

“We want to keep our township rural, and I think there’s a lot of us here who would like to that,” she said.