The current industrial landscape is as overwhelming as it is innovative. Worryingly, racks tend to operate well outside earshot. But, the rack industry is turning disruption into an opportunity to broaden education about rack care.

RMI, the industry’s trade association, is promoting basic guidelines of what to look for and when flags should be raised. In addition to enhanced education on how to buy and use rack, strategic planning increasingly includes a fair amount of focus on rack safety and maintenance, says Dave Olsen, national sales and marketing manager for Ridg-U-Rak, including pitfalls to avoid on the used rack market.

“Some companies do a tremendous job training operators and maintaining their rack,” says Olsen. “There are others where you walk in and they need to unload this rack right now. The column isn’t even bolted to the floor anymore. Sometimes operations and procurement people are required to manage the budget and stay lean, but that’s not an area you want to skimp on.”

To be fair, it’s hard to blame anyone who bought rack, likely after a rigorous evaluation, for not going on to develop a nuanced understanding of rack deformation. Operational speed, capacity and efficiency are being tested like never before.

Going forward, the types of rack decisions that used to come a few times a century will be more common, suggests Jacqueline Terrell, vice president of marketing for REB Storage Systems International.

“Rack users should avoid only planning for the present,” she says. “This is becoming especially important with the addition of the various types of automation available. To continue to be successful, you must keep up with these advancements.”

From the ground up 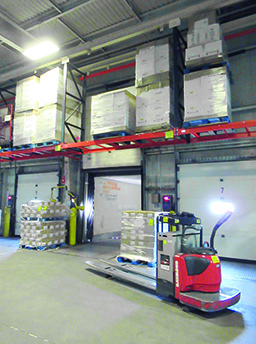 Everyone is trying to do more with the same equipment, and many are learning that their infrastructure doesn’t support the throughput they need. Tracy Buck, sales engineer for Dexco, says customers are keen to strategize in a global market.

“A lot of them feel like the demands of the world are on their shoulders,” Buck says. “They’re realizing that storing the old way and using a clipboard is not going to cut it in 2020, so they want to increase selectivity and availability while cutting equipment downtime.”

As a result, the rack specification process now includes considerations like machine uptime and just-in-time inventory to efficiently move things through the plant. Inventory management, equipment productivity and product damage all affect racking operations, Buck says. “There are a lot of types and features, but it all comes down to what and how they need to store. This industry has been dormant for many years, but big change is underway,” he adds.

Terrell says preparing for the future can include examples such as designing the layout so racking, mezzanines, conveyors and the system are completed in phases. This will accommodate current needs, Terrell says, and allow the rack user to build out, or up, when needed.

Rack system removal, reconfiguration and reinstallation is more prevalent than ever in distribution centers, she says, adding that users may need to expand operations, adjust overall warehouse flow, or manage changing SKU profiles. Terrell says all sprinkler systems, lighting, etc., should be accounted for to ensure expansions stay compliant with fire and building codes.

To ensure a materials handling system can accommodate predicted operational growth, Terrell recommends partnering with an integrator or manufacturer to create a design that satisfies all current and future needs.

“For an operation to truly be successful, you can’t simply purchase rack, set it up, and place the products on it,” Terrell says. “The operation as a whole must first be assessed (space, SKUs, materials handling equipment, etc.) and the rack system must be designed around that. We’re seeing more and more companies take this seriously.”

She suggests customers’ ever-growing demand for speed places more focus on the design of a rack system. Rack users need to put more product in less space and get it shipped faster, Terrell says. To do this, many companies are storing and distributing items from fulfillment centers that are smaller, more numerous and localized.

“Many of these types of facilities are reducing or eliminating static storage,” she adds. “There’s simply not enough space. Distribution centers basically have what they need, pretty much when they need it, and not much else. It’s replenished as needed, and it’s down to a science.”

As a result, Terrell says dynamic rack systems like pallet flow and carton flow are more popular than ever. Some customers are even storing and transporting items on carts or shelving fitted with casters for easier movement in smaller environments.

Buck says all this activity only increases the risk to rack, equipment and products. “A needle in a haystack has probably been handled a dozen times, which increases risk of damage,” he says. “It used to be the main concern was damage in transit. Now, you see more once it’s received.”

This has also sparked conversations with manufacturers of forklifts and automatic guided vehicles (AGVs) to handle, retrieve and stage goods overnight. “Automatic touching is where it’s going,” Buck says. “Almost every company wants to get that efficiency.”

Olsen expects business to ramp up in 2020, but says the economy in general is waiting to see what happens. The election is certain to mix things up, Olsen says, and China tariffs could play a role.

“Last year was a very good year, and 2020 should be close, but global events could change things overnight,” Olsen says.

Olsen expects a significant segment of the market will move forward with investments in any case. Depending on their sensitivity to taxation, he says other companies are sitting on the sidelines and waiting to see what shakes out from tariffs and the election.

Americold, a global provider of temperature-controlled infrastructure, knew the rack in one of its warehouses was outdated, but they could not stop operations to replace rack. Following a successful rolling install, the refurbished rack increased storage space and load capacity, significantly increasing available pallet positions.

The old drive-in racking was a cost-effective, high-density storage system. Instead of load beams, pallets rested on horizontal rails at either side of the lane, providing a balance between density and selectivity.

Still, some of the racking needed to be replaced without disrupting operations. The -10°F environment also posed a challenge for the rack design crew, project manager and installers, requiring many hours bundled in freezer suits and heavy gloves. Installers had to find efficient spaces for tools, equipment and staging for materials being removed or installed. The rack demolition crews kept one sector ahead of the installation crews. As one area was complete, it was filled with product from the next area to be demolished. This kept the number of out-of-commission storage bays to an absolute minimum.

“The process was pretty much seamless,” Phil Beaulieu, director of engineering for Americold, says.

Given narrow aisles, a dimly lit workspace and operating speeds, forklift impacts are inevitable. The new rack (Steel King) includes custom-engineered uprights with heavy horizontal braces within the rack frame, and cantilevered legs to keep the rack column out of the forklift path. Rub rails, custom end guards and welded-on column protectors enhance the frame strength where it is most vulnerable to impact.

The new rack system is substantially more durable and the number of pallet positions is significantly larger.

“There will be some hesitation, which could cause some short-term slowdown, but the economy is still robust,” Olsen says. “I think it will work itself out going forward, and I feel pretty positive about the trend going strong for the next five years.”

Already, rack manufacturers and users are grappling with rapid innovation. Particularly in the electric forklift market, mast heights are, well, climbing. This is “a new dynamic,” Olsen says, which has driven up demand for higher rack. Going vertical is more critical in Europe than the United States, where Olsen says there is still a lot of expansion in rural areas.

“But there are enough out there who do want to go higher, and traditional forklift manufacturers are looking at that,” Olsen says. “Traditionally the standard was below 40 feet, and now they’re going well above.”

In the meantime, the world of big box retailers is still in the midst of a tremendous shift to meet online growth. Accordingly, Olsen predicts strong growth in logistics, and more requests for automation and robotics.

“It doesn’t necessarily impact us positively, but all rack manufacturers need to be cognizant that more projects we’re involved in have pieces of automation, especially in markets where labor or the cost of labor is a constraint,” Olsen says. “Rapid order fulfillment continues to be an area of strong focus, with more and more demand for multi-level picking platforms and pick modules.”

Over time, Olsen anticipates a decline in warehouses with narrow aisles and order picking platforms, where there will be more focus on automation. Instead of forklift-based picking, many will move into multi-level conveyance operations, he suggests.

“These are some things that Walmart has been doing for a while,” he says, “but they will become more common in smaller DC operations—or at least a piece of their operations.”