Printed headline: Linking Up With Blockchain

Blockchain is best known as the technology that underpins cryptocurrency transactions, but it also has the potential to improve the transparency, access and sharing of data in other sectors—including aviation.

Otherwise known as a distributed ledger, blockchain offers users a complete, time-stamped record of the transactions and processes within it. Each time-stamped event forms a block in the chain, which is virtually impossible to retroactively alter. For an aviation part, these events might include production, removal, testing, repair and reinstallation.

For any participant in the aviation aftermarket, the attraction of such a ledger is clear: the ability to call up complete, verified back-to-birth records for any part at the touch of the button. If every part were tracked in such a way, it would eliminate much of the bureaucratic burden involved in aircraft and engine transactions. It would also restore value to a massive inventory of components. GE, for instance, has estimated that it holds “tens of millions of dollars” of used parts that cannot be sold because they lack proper paperwork.

Viewed through this lens, blockchain seems like a magic bullet. It is capable in theory of eliminating at a stroke many of the record-keeping deficiencies that bedevil the aftermarket. Unsurprisingly though, matters are not so simple. For example, in the case of bitcoin, every transaction is recorded in the same distributed ledger. For the equivalent to happen in aviation, every party that touches a component throughout its life—OEM, airline, line maintenance provider, heavy maintenance provider, spare parts distributor and so on—would need to be part of the same blockchain. To some, such a coordinated solution seems a long way off given how some data in the supply chain is jealously guarded. Yet others believe a new era of data transparency is approaching.

“We feel that the primary benefit to blockchain is collaboration and a shared ledger across businesses,” says David Havera, blockchain leader for GE Aviation, which is developing a set of blockchain-based solutions in partnership with Microsoft Azure. “We have seen many failed blockchain efforts because [stakeholders] felt that blockchain solutions are a zero-sum game with limited openness or no openness at all.”

According to Havera, Microsoft agrees that collaboration is key and has sought to facilitate this on its Azure platform by supporting different types of ledgers as well as open-source development tools. However, even if the technology can interact, decentralized data management can only work efficiently if it accords with common standards, for instance on matters such as metric or imperial measurements.

“Our focus is on working with customers, competitors and regulators to define an industry standard for data sharing. Once this standard is created, everyone will become more efficient,” says Havera. 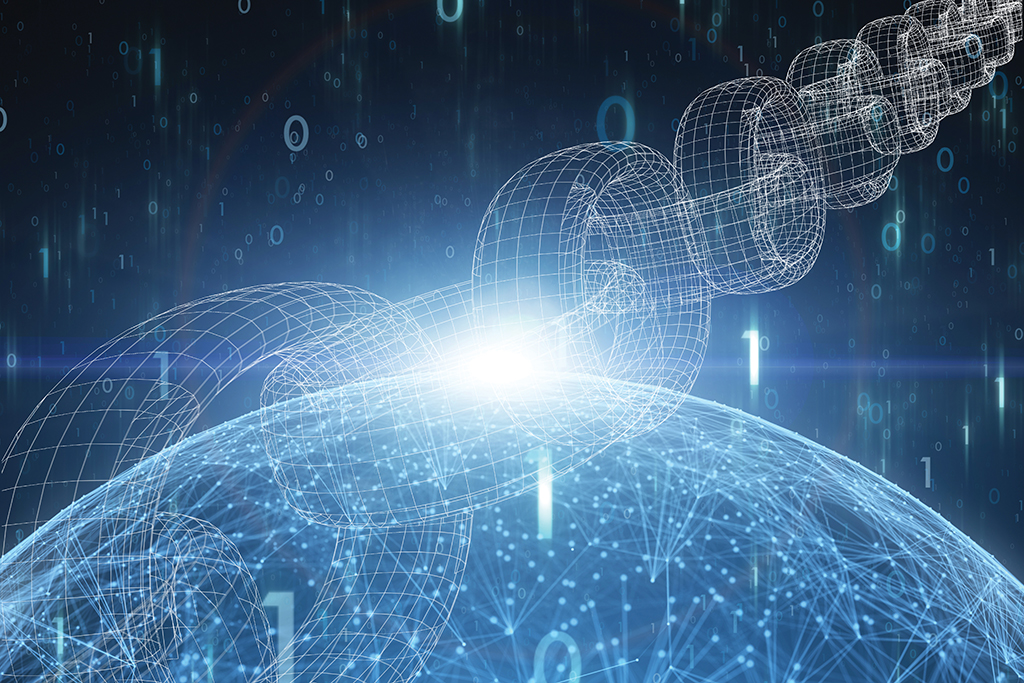 The push toward standardization and collaboration is also supported by the MRO Blockchain Alliance, a newly formed noncommercial partnership that aims to fully realize the benefits that blockchain can offer by bringing together all aftermarket stakeholders under the technology’s umbrella.

Bas de Vos, IFS aviation specialist and director of IFS Labs, the company’s technology think tank, takes a similar stance on collaboration. “Cooperation will be key, so we’re very curious to see over the coming years whether initiatives such as the MRO Blockchain Alliance will be able to gain sufficient mass to really be able to implement a blockchain solution for aircraft MRO,” says de Vos. “It should never be a single company but always a consortium of companies doing this.”

Those thoughts are echoed by Andre Fisher, chief executive of FLYdocs, who told Inside MRO at MRO Europe in October: “We need a multiparty cooperation approach that allows everybody to join this. One plus one has to equal more than two.” Although no single partner is taking the lead in the alliance, FLYdocs is one of its four founding members. Fisher has also said another 10-11 parties are willing to join. “They represent every part of the industry. We are an alliance with key stakeholders representing the entire MRO community,” he adds.

For companies weighing the benefits of blockchain, usually the choice is between its distributed ledger technology and the traditional method of centralized servers. Often the latter remain attractive due to the control they afford over one’s own data, a lower reliance on third-party technology developers and a perceived risk inherent to blockchain that some associate with its cryptocurrency origins.

On the other hand, centralized servers are ill-suited to data sharing and are a less reliable way to ensure accurate data updates.

Havera agrees, saying that “when push comes to shove, traditional databases have been around forever, and if they could cost-effectively solve customer problems at scale, then they would have already done so.”

De Vos believes it is more likely we will see a hybrid model between traditional databases and blockchain. “The reality is that even if you could come up with an A+ blockchain solution for aviation, you still would only store data in the chain that is relevant for sharing,” he says. “In my opinion, if successful, it will end up being a hybrid model. Main data storage for an organization will still be in a traditional database, but those pieces of information which need to be shared will be replicated into a blockchain.”

The world’s biggest maintenance company, Lufthansa Technik, is not currently proceeding with a blockchain solution, although it recognizes the value of the technology.

“It has the potential to significantly reduce paperwork and time-consuming verification processes through reliable and transparent information not available today,” says Steffen Parth, Lufthansa Technik’s manager of business development, innovation and products in the company’s base maintenance division. Parth adds that the company sees “no general drawback” to blockchain and that “it will be used once it represents the most adequate solution to a problem in our business.”

“For me, that’s the key,” de Vos says. “If enterprise blockchain is the answer, what’s the question? Although I see the value in an aviation MRO use case, in general I see a tendency in the market to invent solutions using blockchain because it’s ‘cool’ but not necessarily because it’s the best answer today for a problem the enterprise has today.”

Airbus is slightly more circumspect. “We’ve analyzed the value creation potential of blockchain within our industry and considered that at its current state of maturity, blockchain doesn’t represent ‘game-changing’ technologies,” says a spokesperson. “Nevertheless, we are closely monitoring it.”

“Transitioning to blockchain means making a fundamental shift to your company’s data-ownership model,” observes Platz. This in effect simultaneously highlights the most intimidating and exciting aspects of the technology.

Since every entry, or event, in the blockchain is attached to a time stamp and the name of the entry’s creator—and must be verified by every other participant in the blockchain—the integrity of the data is extremely strong. On the other hand, that data becomes accessible to more parties. While companies can restrict access via passwords to limited groups, or just internal to themselves, this hinders the inherent usefulness of blockchain.

Platz says companies will want to test the waters before committing themselves to a widely distributed ledger. “Many users will begin development in a more centralized environment and then gradually turn up the decentralization dial over time,” he says.

Another compromise is to have a wide ledger but to define data access or update permissions for each individual entry in it. Fluree allows users to do this, which means that companies can “openly expose their data sets without ever having to worry about a possible leak,” says Platz.

If aviation businesses do acclimatize themselves to blockchain, a knock-on benefit might be to curtail the escalating arms race over data between OEMs and maintenance providers.

“We think that all parties in the industry will benefit from verified data on aircraft and components,” says Parth. “Thus, blockchain could even offer new means of cooperation between MROs and OEMs.”

Companies that like blockchain but are reluctant about entrusting their data and its security to third-party developers might be tempted to create their own solutions. “This is a mistake,” says Havera, who initially leaned toward the do-it-yourself approach before realizing that “I could not build solutions that would scale and have the required security necessary to meet our customers’ expectations.”

Part of the reason for this, he says, is that a blockchain solution covers an entire software stack, from back- to front-end coding, within which the machinery of the blockchain itself is only a small part. “Blockchain is greatly misunderstood because it covers all the traditional software engineering stacks, plus data science, plus blockchain coding,” he says.

Havera also warns against rushing into the technology. “We find that the easiest part of a blockchain solution is immediately launching it to market,” he says. “However, that often results in poor adoption, limited or flawed functionality and ultimately a poor return on investment.”

Another hurdle is getting the data onto the blockchain in the first place, especially in cases where it is limited to paper-based records. Digitization across the aftermarket will help in this regard, although there is plenty of work still to be done.

“Right now, we are working with customers on the biggest bottleneck: data processing,” says Havera. “We see a lot of antiquated, manual processes around data preprocessing that can be optimized with lean Six Sigma and integrated into Microsoft Azure with no code solutions.”

Further down the line—once a distributed ledger is up and running—there are concerns about energy usage and transaction times. Bitcoin has been estimated to consume as much power each year as Switzerland, while the average confirmation time for a transaction is about 10 min.—but can run to hours or even days.

However, even the largest aerospace aftermarket distributed ledger will be only a tiny fraction of the size of the Bitcoin network, so event confirmation should occur much more quickly. Platz says that Fluree’s confirmation speeds are comparable to traditional databases, adding: “In terms of queuing up and committing transactions, the time to commit is determined by a specific solution’s network size and configuration.”

In the meantime, the aftermarket awaits confirmation that blockchain can be rolled out across enough stakeholders to maximize its usefulness in parts tracking and data collaboration.